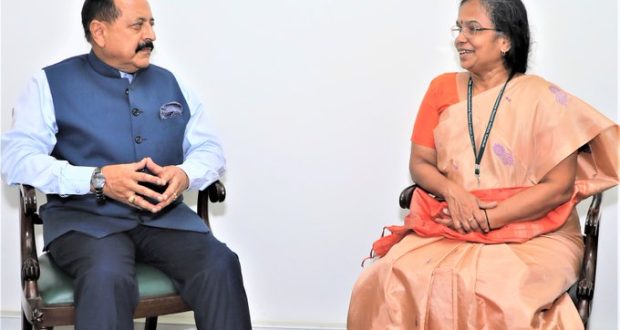 Dr Jitendra Singh congratulated Ms Kalaiselvi for being the first woman DG of CSIR in its rich history and legacy of over 80 years. He also underlined that Prime Minister Modi has penchant for taking such historic decisions having positive bearing on overall growth and development of the country.

Dr Jitendra Singh said that CSIR having a network of 38 laboratories and over 4,500 scientists must focus on emerging innovations in areas like Hydrogen in the energy transition, Carbon capture and storage, Accessible solar power, Plastic recycling and Cheap energy storage. He lauded National Aerospace Laboratories, a constituent of the Council of Scientific and Industrial Research (CSIR-NAL) for recently showcasing the solar powered high altitude long endurance unmanned aerial vehicle, also known as the ‘High Altitude Performance (HAP) Vehicle. The HAP is designed to fly at an altitude of 22 km and for a span of up to 90 days and could work as a pseudo satellite, with a higher performance, lower launch cost. Similarly, the Minister also underlined the pioneering work being done in Drone technology.

Dwelling on the Aroma Mission of CSIR, Dr Jitendra Singh said, “Purple Revolution” in Jammu and Kashmir has changed the face of farming in UT. He said, due to high monetary returns, in a brief span of time, aroma/lavender cultivation has become a popular option in farming for agricultural Start-ups in J&K.

Dr Jitendra Singh also discussed to take the state-of-the-art Heli-borne survey technology of CSIR for groundwater management on a wider scale with cooperation and coordination from Jal Shakti Ministry. He said, the technology developed by CSIR-NGRI Hyderabad was applied last year in States of Rajasthan, Gujarat, Punjab and Haryana and this could play an important role in positively contributing to Prime Minister Narendra Modi’s Vision and Mission of “Har Ghar Nal Se Jal”. Similarly, the mechanized sewage cleaning system developed by CSIR for wider dissemination will help in achieving the target of Swachh Bharat Mission, he added.

2022-08-08
Editor in chief
Previous: Bhubaneswar 8/8/22:AmitShah along with Dharamendra Pradhan and other dignitaries launched the HarGharTiranga campaign
Next: NCW offers bilingual Entrepreneurship Programme for Women in collaboration with IIM Kozhikode