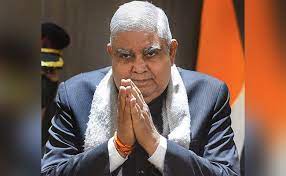 Newdelhi:6/8/22:NDA Candidate Jagdeep Dhankhar has been elected as the 14th Vice President of India. In the election held today, he won 346 votes over opposition candidate Margaret Alva. Briefing media at the parliament house, returning officer for the vice presidential election and Lok Sabha Secretary General Utpal Kumar Singh said that out of 780 votes of Members of Parliament, Jagdeep Dhankhar got 528 votes while Margaret Alva could garner 182 votes. He said, 15 votes remained invalid.

Regional parties like Janata Dal (United), YSRCP, BSP, AIADMK and the TDP have supported NDA’s candidate Jagdeep Dhankhar. Along with the UPA allies, Aam Admi Party, TRS and Jharkhand Mukti Morcha have supported Mrs. Alva in the election. Ont the other hand, the All India Trinamool Congress decided to abstain from the vice presidential election.

The vice president is also the chairman of the Rajya Sabha. Present Vice President of India M Venkaiah Naidu’s term is ending on the 10th of this month.

Earlier in the morning, as the polling process began, Prime Minister Narendra Modi, Union Ministers Amit Shah, Rajnath Singh, and Lok Sabha Speaker Om Birla were among the first to cast their votes.

2022-08-06
Editor in chief
Previous: KVIC Odisha State Office is implementing a pilot project of footwear manufacturing under Gramodyog Vikash Yojana
Next:  Malkangiri Police has recovered a huge cache of arms, explosives and other incriminating articles from a major Maoist dump inside Jantri forest