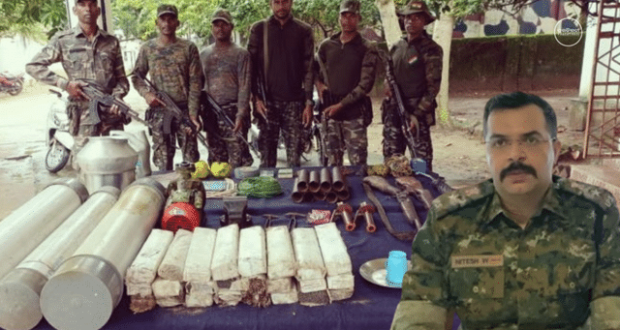 in District Diary 13 days ago Comments Off on  Malkangiri Police has recovered a huge cache of arms, explosives and other incriminating articles from a major Maoist dump inside Jantri forest 42 Views

Malkangiri6/8/22: Malkangiri Police has recovered a huge cache of arms, explosives and other incriminating articles from a major Maoist dump inside Jantri forest near Arlingpada village under Jodamba panchayat of Malkangiri’s Swabhiman Anchal.

Addressing a press meet here today, Malkangiri SP Nitesh Wadhwani informed that on the basis of specific information received, an intensive search was carried out by Malkangiri Police in Swabhiman Anchal.

During the search, the police team came across a major Maoist dump near the forest area of village Arlingpada at about 4.55 pm on August 5, the SP said.

The security personnel recovered and seized a huge quantity of arms, IEDs, welding equipment, Maoist literature and other incriminating articles from the dump.

The Malkangir SP said that due to intensified operations against Maoist, the Naxal activities is gradually decreasing in the district.

The police suspect that the seized explosives and Maoist articles belong to the AOBSZC outfit and were intended to be used against innocent civilians and security forces. In the wake of recovery, further combing and search operations have been intensified in this area, the police added.