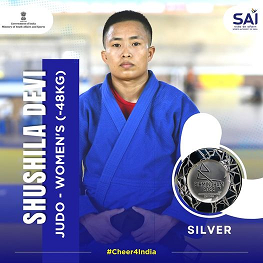 In a tweet President Smt. Droupadi Murmu said, “Your impressive performance has won you countless admirers and inspired millions of girls. India is proud of you.”In another tweet President tweeted, “An inspired performance by Vijay Kumar Yadav in his first Commonwealth Games. Congratulations for winning bronze medal in men’s 60 kg judo. Your dominance in the earlier rounds demonstrated your abilities that brought you the medal. I wish you more success in the future.”The Prime Minister, Shri Narendra Modi has congratulated Shushila Devi Likmabam, Vijay Kumar Yadav and Harjinder Kaur. In a tweet, the Prime Minister said; “Elated by the exceptional performance by Shushila Devi Likmabam. Congratulations to her on winning the silver medal. She has demonstrated remarkable skill and resilience. Best wishes for her future endeavours.”

Shri Thakur tweeted, “Congratulations Harjinder Kaur on your maiden medal win at CWG! Your journey from a village in Punjab to the international podium for a bronze medal will motivate many youngsters to pursue their dreams!” In another tweet Shri Thakur added, “It’s heartening that NSNIS Patiala where you train, has proved to be the cradle of champions in this CWG as well. Your Khelo India University Games silver was perhaps the first stepping stone towards larger wins. I wish you many more successes in the future!”