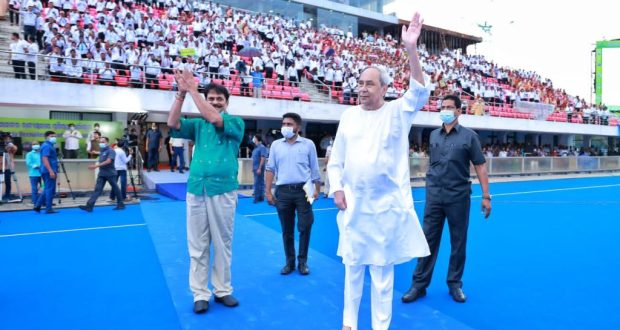 Bhubaneswar:1/8/22: Odisha Chief Minister Naveen Patnaik on Monday attended the orientation programme organised for 6,891 newly-recruited high school teachers at Kalinga Stadium in Bhubaneswar and advised them to take teaching as a resolution and not just a job.

“You are all young and very enthusiastic. So don’t take teaching as a job but as a resolution. I believe you will play an important role in brightening the future of the children of my Odisha,” said Chief Minister Naveen Patnaik.

It is worth noting that a total of 6,891 teachers have joined the School and Mass Education Department of the Odisha government today. An orientation program was organised for these newly appointed teachers at the Kalinga Hockey Stadium.

On this occasion, the Chief Minister said that the teacher recruitment program is continuing in the state at a rapid pace. He said that more than 14,000 teachers have been recruited by the state government in the last 3 years.

Congratulating the newly-appointed teachers, the Chief Minister said that teachers are the builders and glory of the nation. “You are taking the sacred responsibility of building the future generation of the country, Patnaik said adding “education not only changes an individual or a family or a society but also changes the destiny of a nation”.

Highlighting the 5T initiatives of the state government, the Chief Minister said that education is the most powerful way of transformation. ‘Teamwork, technology, transparency, transformation and time limit are the mantras of our administrative system,” he said.

Minister for Industries and Power Pratap Deb, and Minister for Water Resources and Commerce & Transport Tukuni Sahu, participated in the programme and expressed the view that the school transformation program has created new opportunities for children and a new identity in the field of education. They expressed the hope that the role of teachers is important for the future transformation of students and that the newly appointed teacher will fulfill this significant task.

During the programme, three teachers – Pabitra Kar, Pramita Patnaik and Jayashree Padhi shared their experiences and said that this training program, being held in the presence of the Chief Minister, sends a message to the whole world that how teachers are welcomed and respected in Odisha. Highlighting the recruitment process, they said that all of us have been recruited in a very transparent process and we will work for the intellectual and overall development of the students with full commitment.

On this occasion, the Minister for School and Mass Education, Samir Dash said that the teacher recruitment program in the state has been streamlined. He advised laying emphasis on developing the creative talents of children.

State Higher Education Minister Rohit Pujari expressed his gratitude and said that due to the transformation of schools, the education system of the state has become world-class.