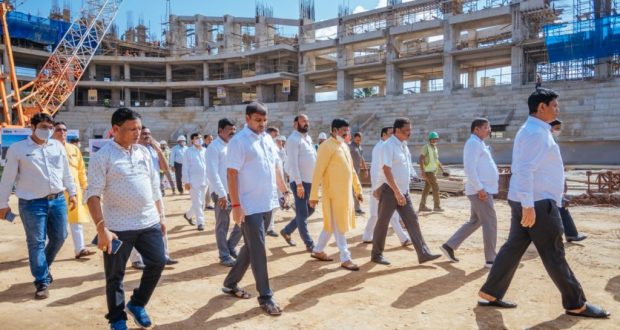 Bhubaneswar:27/7/22: Members of Odisha Legislative Assembly led by Speaker Bikram Keshari Arukha today visited the existing and upcoming sports infrastructure and High-Performance Centres within the Kalinga Sports Complex that is redefining the Sports Ecosystem of Odisha. They later enjoyed the much-awaited tackle between India against Bangladesh at the SAFF-U20 Championship ongoing there. Minister for Sports and Youth Services, Tusharkanti Behera and Secretary, Vineel Krishna, welcomed the Hon’ble Speaker and esteemed members of the Odisha Legislative Assembly. Sports Secretary presented the journey of Sports in Odisha over the last decade that has established Kalinga Stadium and Odisha as significant sports hub for marquee events.

Chief Secretary Suresh Chandra Mahapatra emphasised on the importance of giving adequate training, coaching, infrastructure, Sports Science and nutrition to athletes so they can train and transition to High-Performance Centres and excel at national and international platforms. Within a short span, athletes from Odisha have been making their mark in Swimming, Athletics and Hockey and in coming years Odisha will produce many players.

Secretary to CM (5T) VK Pandian, highlighted Chief Minister’s vision to promote Sports and to extend all necessary support for sports and take Odisha to the next level. Odisha is hosting the Men’s Hockey World Cup for the second time and this is a matter of great pride for Odisha. Additionally, it is going to be held at two venues which is rare but Odisha is committed to making this upcoming world cup a big success.

On behalf of the Odisha Government and Sports and Youth Services Department, Development Commissioner, Pradeep Jena, thanked the Members of the Odisha Legislative Assembly for making time for the visit and being a part of Odisha’s sports journey through the years.

2022-07-27
Editor in chief
Previous: PV Sindhu has been chosen as the flag bearer of the Indian contingent for the opening ceremony of the Commonwealth Games 2022
Next: Need for a new legal framework governing Telecommunication in India