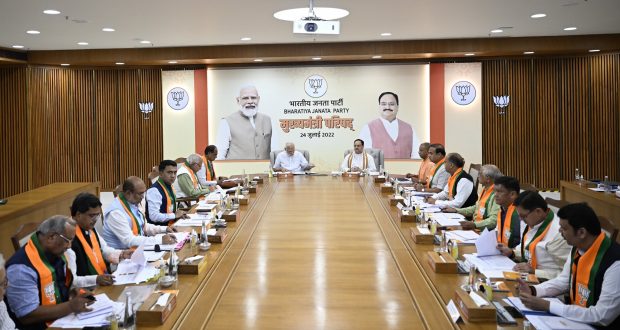 During the meeting, Mr. Modi emphasized better implementation of some of the key schemes and initiatives of the government like GatiShakti, Har Ghar Jal, Svamitva, DBT implementation, and Government eMarketplace, especially in the BJP-ruled states. Talking about rural areas, he spoke about the significance of Gobardhan and the need to further popularise the initiative. Mr. Modi underlined the positive impact of nano-fertilizers on crop productivity and spoke about increasing their usage. Prime Minister stressed the need to ensure saturation-level coverage of all key schemes and said that BJP-ruled states should take a lead towards this.

The Prime Minister asked the Chief Ministers to ensure that their states accord due importance to sports and ensure the provision of best facilities for encouraging participation and engagement of youth in large numbers. He emphasized that BJP-ruled states should aim to become known for their sporting culture. In the meeting, the progress of the Amrit Sarovar Mission and preparation for the Har Ghar Tiranga campaign were also reviewed.