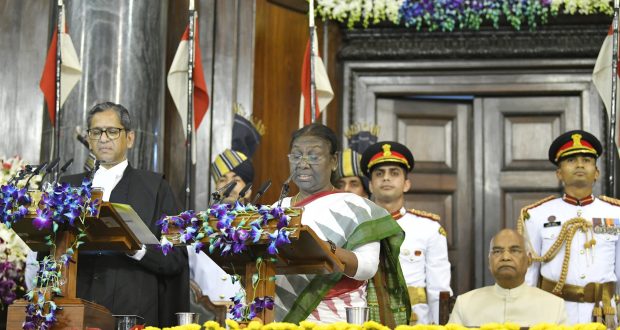 Newdelhi:25/7/22:Ms. Droupadi Murmu was sworn in as 15th President of India today. She was administered oath by Chief Justice of India N. V. Ramana at the Central Hall of Parliament. Speaking on this occasion, President Droupadi Murmu said, this is the beauty of Indian democracy that a poor lady from a far-flung area has become the President. She said, reaching the Presidential post is not her personal achievement, it is the achievement of every poor in India. She added that her nomination is evidence that the poor in India can not only dream but also fulfill those dreams. Ms. Murmu reiterated her resolve of working towards the upliftment of  marginalized, and empowerment of women and young for the inclusive growth of the country. 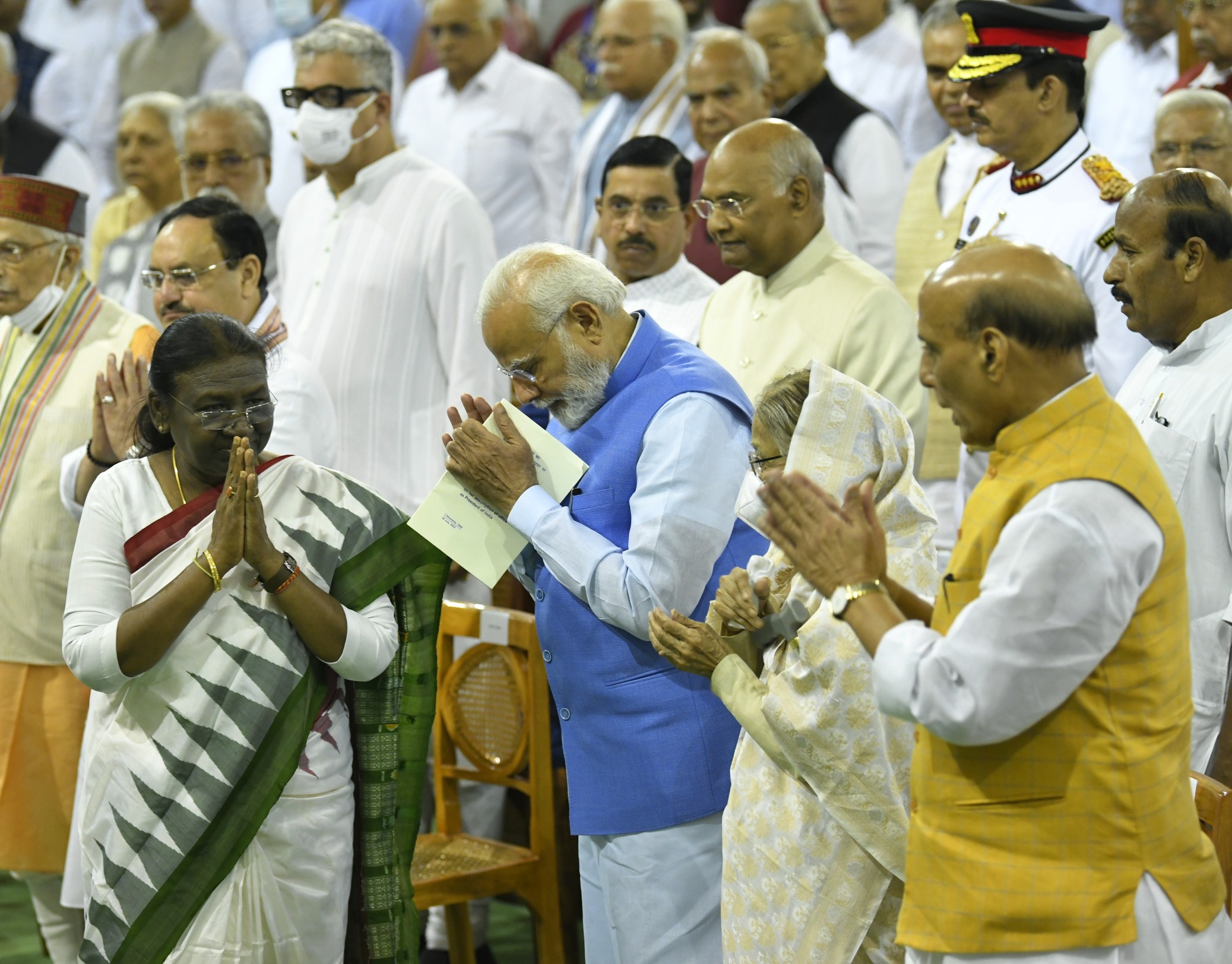 Earlier in the morning, Ms. Murmu paid tribute at Rajghat in the national capital ahead of her swearing-in. After that outgoing President Ram Nath Kovind and his wife Savita extended greetings to Ms. Murmu at Rashtrapati Bhavan. They then reached the Central Hall in a ceremonial procession.After the conclusion of the ceremony, the President left for Rashtrapati Bhavan where an Inter-Services Guard of Honour was given to her in the Forecourt, and courtesies were extended to the outgoing President Ram Nath Kovind, Rajya Sabha Chairman M. Venkaiah Naidu, Prime Minister Narendra Modi, Lok Sabha Speaker Om Birla, Union Ministers, Governors, Chief Ministers, Heads of Diplomatic Missions, Members of Parliament, and principal Civil and Military Officers of the Government of India were present in the Swearing-in Ceremony. 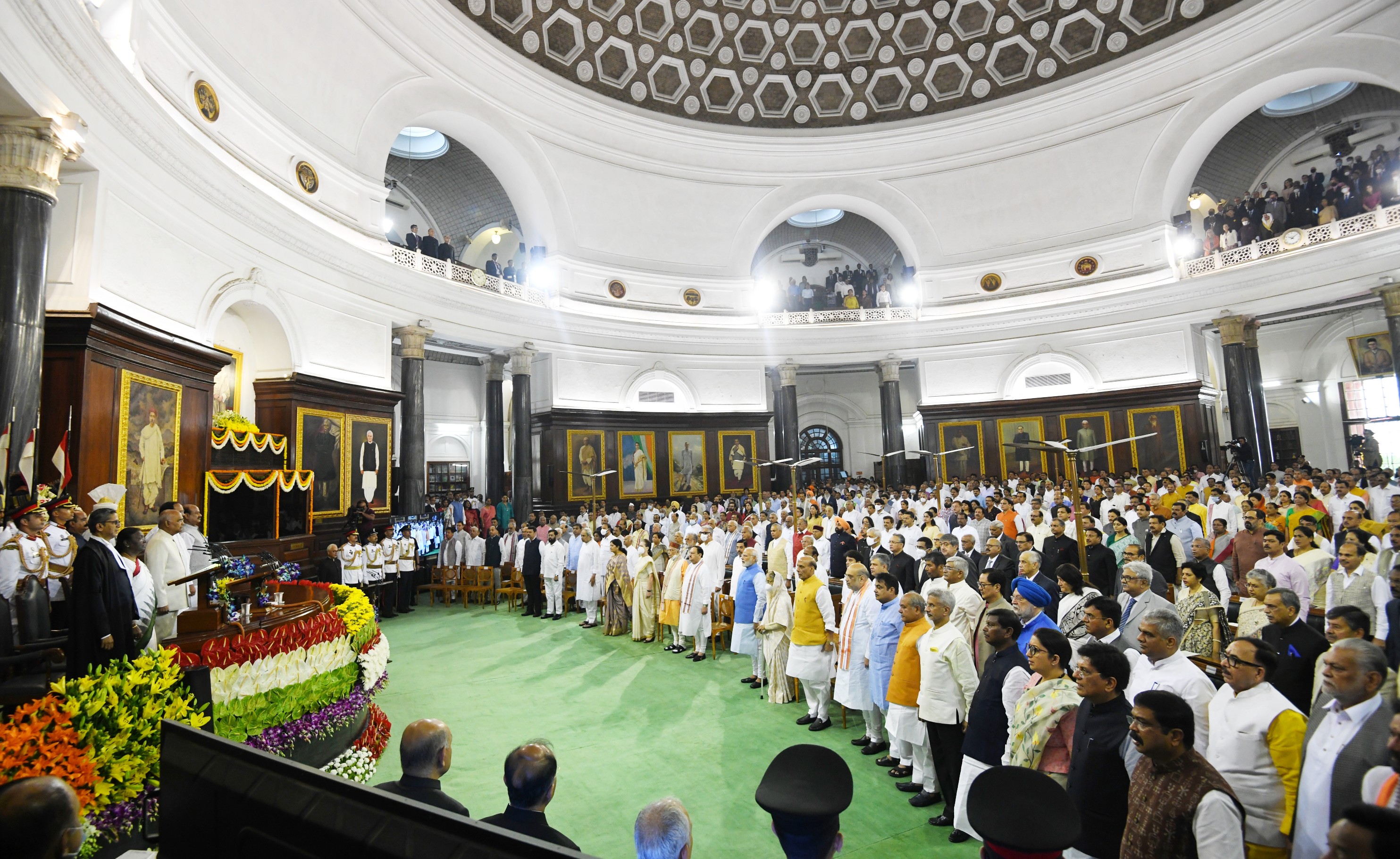 The 64-year-old is the youngest President of the country. She is also the first President of India who is born after Independence.  Ms. Murmu joined politics in 1997 and was elected Councillor in Rairangpur Notified Area Council of Odisha. She served twice as an MLA from Rairangpur Assembly Constituency from 2000 to 2009 and once as a Minister for Commerce, Transport, Fisheries, and Animal Resources Development in Odisha Government. On 18th May 2015, Ms. Murmu took oath as Governor of Jharkhand and stayed in the post till 12th July last year. She was the first woman Governor of the state and the first female tribal leader to serve as a Governor in any Indian state.

#DroupadiMurmu takes oath as the 15th President of India.

She is the second woman President of the country and first-ever tribal woman to hold the highest Constitutional post pic.twitter.com/pRGcrquRda