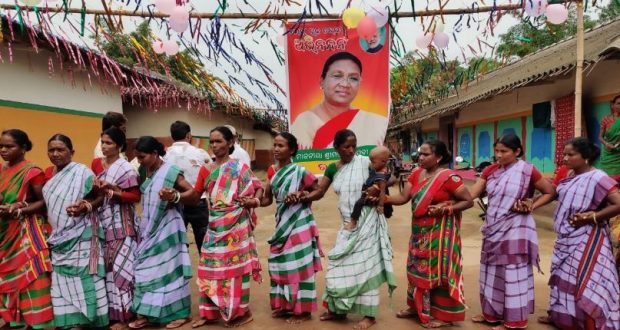 Rairangpur:25/7/22: Soon after Droupadi Murmu took oath as the first tribal President of India, celebrations began at her native Uperbeda village in Rairangpur of Mayurbhanj district.

The local villagers dressed up in traditional Santhali attire, performed their folk dance and celebrated the moment.

Earlier today, Droupadi Murmu took oath as the 15th President of India and became the first president to be born after the independence.

Chief Justice of India N.V. Ramana administered the oath of office to Murmu in the Central Hall of Parliament.

Outgoing President Ram Nath Kovind and Murmu arrived in Parliament in a ceremonial procession shortly before the swearing-in commenced.