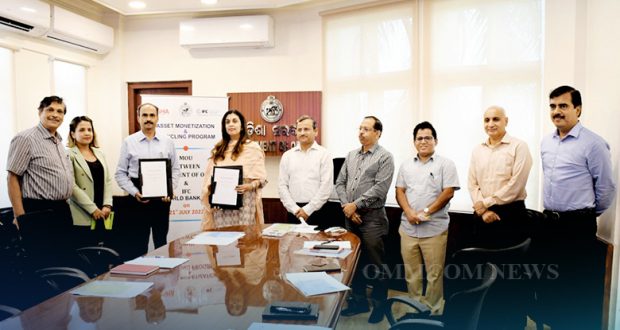 in Business, State News 22 days ago Comments Off on Odisha Govt & IFC signed an MoU to support in the implementation of the Asset Monetization 51 Views

Bhubaneswar: 21/7/22:The government of Odisha’s Industries Department and IFC, a member of the World Bank Group today signed an MoU to support in the implementation of the Asset Monetization & Recycling Program (AMRP) for the state.

This Program is a part of a wider World Bank Group Technical Assistance to support the state in monetizing existing public sector assets and enhance the state’s economic growth.

The Program will facilitate and accelerate the monetization process in the state by unlocking the value from large scale public investment in the brownfield infrastructure assets and bringing in private sector efficiencies.

IFC will support the state in screening and developing a prioritized list of monetizable brownfield state-owned assets for select sectors that can be further screened to identify and define bankable pilot projects that may be taken to market for attracting private sector investments that can eventually be used for demonstrating the benefits of brownfield-asset monetization and upgrading state’s infrastructure facilities.

Globally, developing countries have been adopting various forms of Asset Monetization and Asset Recycling approach to generate funds for their economies. India’s infrastructure development pipeline has an estimated funding requirement of $1.5 trillion until 2025.

To address this issue and to boost the economy, the Government of India (Gol) rolled out the National Monetization Pipeline (NMP). States are also looking at this opportunity and projects in power transmission, energy generation (including renewable energy and large hydro storage projects), highways and transport related land infrastructure assets, warehousing, etc. are on the list of pilot projects.“With the impact of economic shocks limiting fiscal space in many countries, the need for innovation to fund the infrastructure gap, particularly through crowding in private investments, is all the more crucial,” said IFC’s India Country Head, Wendy Werner.

2022-07-21
Editor in chief
Previous: Smart City Rourkela has been selected among 10 prominent cities in the world to attend the coveted Urban95 Academy Residency
Next: Bollywood actor R Madhavan with his wife and son met Odisha Chief Minister