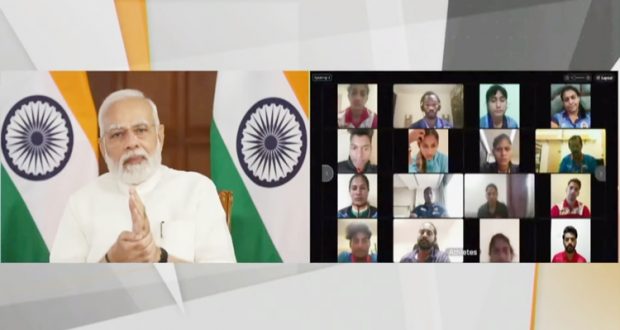 in National July 20, 2022 Comments Off on PM Modi interacts with Indian contingent bound for CWG 140 Views

Newdelhi:20/7/22:Prime Minister Narendra Modi today wished the Indian contingent the very best for Commonwealth Games in Birmingham. He expressed confidence that the athletes who are taking part in Commonwealth Games 2022 for the first time will also make a tremendous impact. Interacting with the Indian contingent bound for the Games in Birmingham, Mr. Modi asked players to play with all their heart, play hard, play with full force and will play without any tension. The interaction is part of the continuous endeavour to motivate athletes ahead of their participation in major sporting events. He urged athletes to go with the mantra of “Kyu Pade Ho Chakkar Me Koi Nahi Hai Takkar Me” when they face their opponents. He stressed that this is the most important period in the history of Indian sports as training is getting better and atmosphere in the country towards sports is also tremendous.

During his interaction with the athletes, the Prime Minister lauded Salima Tete, a hockey player from Jharkhand, for her performance at the Tokyo Olympics. Para-athlete, Sharmila from Haryana, recounted the story of her determination to overcome all hurdles to play for the country. Mr. Modi applauded her spirit and perseverance. Badminton player Treesa Jolly from Kerala spoke about how her father motivated her play the sport. Anchita Shuli of West Bengal told the Prime Minister how he keeps calm and gains strength for weightlifting training by practicing yoga. Avinash Sable highlighted how the army supported him in training for steeplechase.

The Prime Minister has always encouraged athletes before their departure for major sports events; that a Prime Minister motivate athletes, whether they win a medal or not, rarely happens in any other country