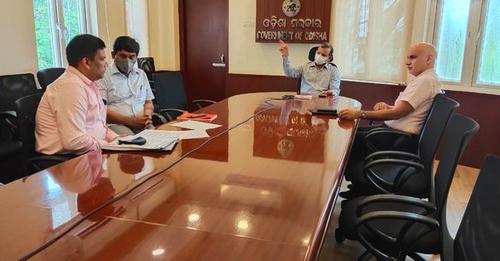 in District Diary, State News July 20, 2022 Comments Off on Odisha Chief Secy Directs To Make Banarpala-Angul Portion Of NH for smooth movement of the traffic 76 Views

Bhubaneswar:20/7/22: Realising the public inconvenience caused by the bad condition of NH-55, particularly from Banarpala to Angul City, Chief Secretary Suresh Chandra Mahapatra called for a high-level meeting between NHAI and Senior officers of the State.

Reviewing the ground level situation appraised by Collector, Angul over VC, Chief Secretary Suresh Mahapatra directed NHAI officers to start the repair works immediately. He directed to keep the road in good condition for smooth movement of the traffic. He also directed expedite the construction of the Angul City bypass road of NHAI. CGM and NHAI present in the meeting assured that repair and maintenance works would be taken up on war footing.

Further, the Chief Secretary directed the district administration to provide all necessary support for the purpose. Angul MLA Rajanikant Singh also urged for immediate repair of the NH.