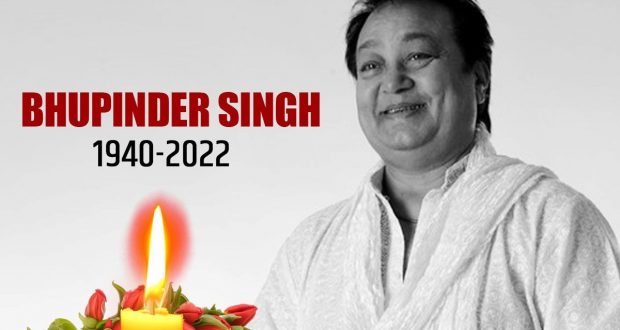 (Once again, the heart’s trying to recover those leisurely days and nights/ Just sitting, thinking and dreaming of the beloved)

Mumbai:19/7/22:One of Gulzar’s most memorable love songs owes a great deal to Mirza Ghalib, whose couplet forms the first line of the song. Gulzar replaced the word ‘Jee’ with ‘Dil’ and expanded the couplet with lyrical dexterity, while Madan Mohan composed it in the honeyed Raag Keervani. Within this near-perfect combination of poetry and melody was Bhupinder Singh’s slightly sluggish, languid voice that moves just a couple of seconds behind the thought. It was a unique expression, not the kind one had heard from male playback singers of the time.

Singh, who moved millions with this famed ditty, among many others, died of a cardiac arrest on Monday evening. He was 82 and had been in hospital for the last 10 days. Dr. Deepak Namjoshi, director, of Criticare Asia Hospital, said, “His condition worsened on Monday morning and we had to put him on a ventilator. He got a cardiac arrest and died on 18th of July at 7.45 pm.in Delhi’s West Patel Nagar.

Born in Amritsar, quite early in his career, Bhupinder performed on All India Radio and was attached to the Delhi Doordarshan Centre. Soon, he started learning violin and guitar. He was invited to Mumbai by music director Madan Mohan, who gave him a break with “Hoke Majboor Mujhe Usne Bulaya Hoga” in war film “Haqeeqat”, where Bhupinder had to contend with the likes of Mohammad Rafi, Talat Mahmood, and Manna Dey. Boasting of a unique voice, the singer was given a solo by Khayyam in the film “Aakhri Khat”.

Instrumental in introducing bass, drums and guitar to ghazals, by late 1960s, the singer strarted releasing private albums with his wife. Gulzar wrote the lyrics for his third LP- “Woh Jo Shair Tha”. He is survived by his wife Mitali and son Nihal Singh who is also a musician.

He began his career with All India Radio, Delhi, and Doordarshan. It was at a get-together in Delhi that Madan Mohan heard Singh and asked him to try his luck in the world of film music. He gave Singh his first break with Mohammad Rafi, Manna Dey and Talat Mahmood in ‘Haqeeqat’. The song was ‘Hoke majboor mujhe’, which found quite some attention. He followed it with others such as Do diwane shahar mein, Naam gum jayega, Karoge yaad to, Meethe bol bole, Kisi nazar ko tera intezaar aaj bhi, and Ek akela is shehar mein, Kisi ko mukammal, among others.In his later years, he also turned to ghazals, performing often with wife and singer Mitali Singh.