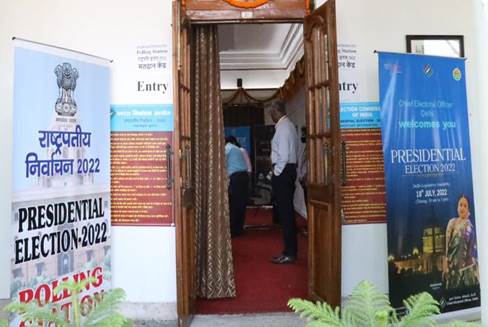 in National July 18, 2022 Comments Off on Voting process to elect 16th President of India concludes; Over 99% elector turnout recorded 49 Views

Newdelhi:18/7/22:Over 99 percent elector turnout was recorded in the Presidential election for which polling was held today. The poll was conducted in a peaceful and orderly manner in all the designated places across the country including Parliament House. The Polling began at Parliament House as well as the premises of the State Legislative Assemblies at 10 A.M which continued till 5 P.M.

Counting will be taken up on Thursday. After the end of the polling process, the Election Commission in a statement said that out of a total of four thousand 796 electors in the list of Electoral College for the Presidential Election, over 99 percent cast their votes today. It said, a hundred percent voting by MLAs was reported from 11 States and  UT of Puducherry.

Addressing media in Parliament House complex,  Rajya Sabha Secretary General P C Mody said that out of the 736 electors comprising 727 MPs and 9 MLAs who were permitted to vote at Parliament House, 730 electors cast their votes. They include  721 MPs and  9 MLAs.  Mr. Mody informed that  99.18% percent of elector turnout was recorded at Parliament House.

The Rajya Sabha Secretary General also informed that the Assistant Returning Officers of various States will start arriving with the polled sealed ballot boxes to Parliament House, New Delhi by road and by air from today itself.

He said all necessary security arrangements for the safe transit of the ballot boxes from the Airport to Parliament House have been made. The Parliament Security Service is coordinating activities with the Delhi Police, Airport Authorities, and CRPF among others to ensure smooth and secure transport of the ballot boxes.

AIR correspondent reports that the term of office of President Ram Nath Kovind is ending on the 24th of July. Former Jharkhand Governor Droupadi Murmu is the NDA candidate for the Presidential election, while former Union Minister Yashwant Sinha is contesting as a joint Opposition candidate for the top post.

Prime Minister Narendra Modi and Union Ministers Anurag Thakur, Piyush Goyal, and Dr. Mansukh Mandaviya were among the first to cast their votes at  Parliament House this morning.

The counting of votes for the Presidential election will take place on the 21st of this month at Parliament House from 11 AM onwards.

The Members nominated to either House of Parliament or the Legislative Assemblies of States, including the NCT of Delhi and Union Territory of Puducherry, are not eligible to be included in the Electoral College.