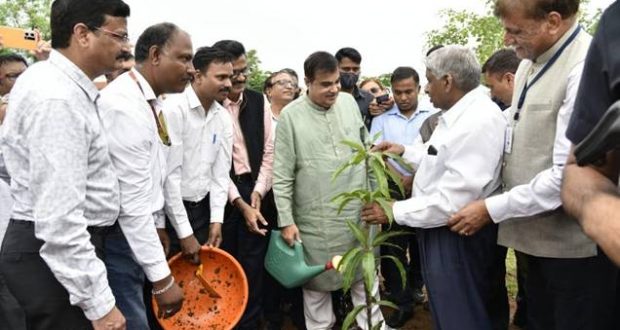 Under Amrit Mahotsav, NHAI Plants around 1.25 lakh Saplings in a Single Day

in Environment, National 22 days ago Comments Off on Under Amrit Mahotsav, NHAI Plants around 1.25 lakh Saplings in a Single Day 46 Views

Newdelhi:17/7/22:Under Azadi Ka Amrit Mahotsav’, NHAI organized a nationwide plantation drive and planted around 1.25 lakh saplings in one day through simultaneous plantations at 114 identified locations. Shri Nitin Gadkari, Union Minister for Road Transport & Highways, launched this day-long initiative at Nagpur. NHAI aims to achieve75 lakh plantations by 15th August 2022 to mark the Amrit Mahotsav, celebrating 75 years of India’s Independence. In his address, Shri Gadkari said that the ministry has been focusing on the plantation and transplantation of trees. A lot of emphases is also on geotagging of these saplings so that the progress and growth of these plants can be monitored. He also called upon people to come forward and participate in this program to have a sustainable and long-lasting impact on the plantation drive.

Minister of State for Road Transport & Highways and Civil Aviation Gen. (Retd) Dr. V.K. Singh and NHAI Chairperson also planted saplings at a function organized in Dasna, Ghaziabad. In his address, Shri Singh said that as per the vision of the  PrimeMinister we have been working to create a viable and sustainable ecosystem and this plantation drive will go a long way in enhancing the environment.NHAI Chairperson Smt. Alka Upadhyaya said that NHAI has been working diligently to not only create a world-class National Highway network but is also putting a lot of effort into sustaining the environment. The Chairperson also said that under the ‘Azadi ka Amrit Mahotsav’ there has been a lot of impetus on afforestation and on creation of‘Amrit Sarovars’ across India to recharge and rejuvenate the water bodies along the National Highways.

Under ‘Azadi ka Amrit Mahotsav’NHAI has taken many initiatives that include plantation drives and creation of Ponds or ‘Amrit Sarovars’ near the National Highways that helps to rejuvenate water bodies and groundwater.

2022-07-17
Editor in chief
Previous: Meeting of Government with Floor Leaders of Political Parties Held
Next: INS SINDHUDHVAJ DECOMMISSIONED AFTER 35 YEARS OF GLORIOUS SERVICE TO THE NATION