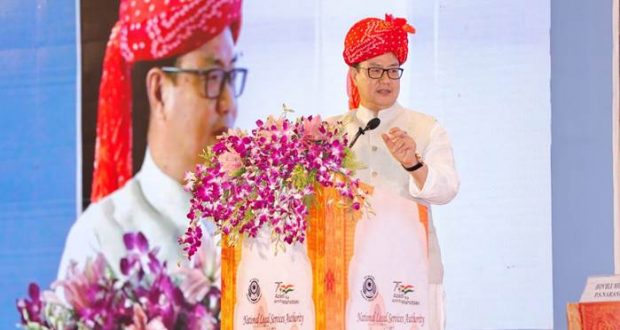 in Law, National July 17, 2022 Comments Off on MoU exchanged between Department of Justice and NALSA on Integrated Delivery of Legal Services 263 Views

Newdelhi:16/7/22: “From this year, Tele-Law service is being made free of cost for citizens in the country,” announced Shri Kiren Rijiju, Minister of Law and Justice at the 18th All India Legal Services Meet at Jaipur today. Tele–Law mainstreams legal aid to the marginalized seeking legal help by connecting them with the Panel Lawyers through the tele/video-conferencing infrastructure available at Common Service Centers (CSCs) across 1 lakh Gram Panchayats. For easy and direct access Tele- Law Mobile Application (both Android and IoS) has also been launched in 2021 and it is presently available in 22 scheduled languages. Benefitting from this digital revolution, Tele-Law has widened the outreach of legal services to 20 Lakh + beneficiaries in just five years.

During the event, Department of Justice, Ministry of Law & Justice and National Legal Services Authority (NALSA) exchanged Memorandum of Understanding (MoU) on Integrated Delivery of Legal Services. The Union Minister said that the MoU is symbolic of our joint commitment to advance the cause of Justice for All and establish the Rule of Law as the greatest unifying factor among the citizens. Under the provision of the MoU, NALSA would provide the services of 700 lawyers, in each district exclusively for the Tele-Law program. These empanelled lawyers would now also act as referral lawyers and also assist in strengthening the mechanism for dispute avoidance and dispute resolution at the pre-litigation stage. Shri Kiren Rijiju expressed his confidence that the association will help in reaching out to 1 crore beneficiaries in no time. 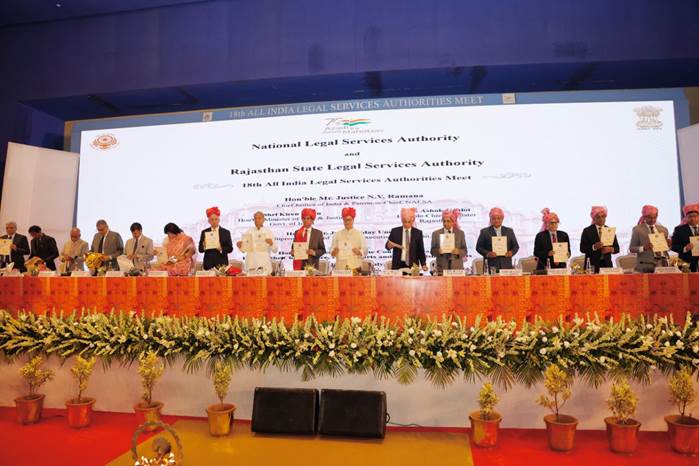 Addressing the event, Shri Kiren Rijiju, underscored the need for decongestion of jails through release of undertrials. NALSA through its SLSAs and DLSAs is already working in this regard through Under Trial Review Committee (UTRCs) by making available free legal aid/legal counsel to the undertrials. During last year a total of 21,148 meetings of UTRCs were held resulting in release of 31,605 undertrial inmates.

The Minister appealed the State Legal Services Authorities to further intensify their efforts to provide legal counsel/aid to the under-trial prisoners so that in coordination with the Under Trial Review Committee maximum number of undertrial prisoners are released. He further appealed the High Courts to ensure during this period regular meetings of UTRC headed by the concerned District Judge so that maximum number of undertrial prisoners languishing in our jails are recommended for release before 15th August 2022. He said that the release of undertrial prisoners may be seen in the context that as part of the celebration of “Azadi ka Amrit Mahotsav” Government of India has already decided to grant Special Remission to prisoners for which the guidelines have already been issued by Ministry of Home affairs

. In his concluding remarks, Shri Kiren Rijiju said that access to justice has been recognized as an integral part of our legal framework prescribed under the Constitution of India. And to achieve, realize this vision and build on the work accomplished so far, there needs to be greater collaboration between legal services authorities and various departments and agencies of the government.