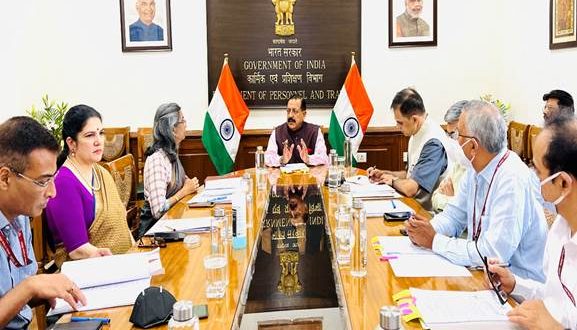 in Literature, National July 14, 2022 Comments Off on CPGRAMS was made operational in all Scheduled Languages to expand its outreach to all regions 79 Views

Newdelhi:14/7/22:Union Minister of State (Independent Charge) Science & Technology; Minister of State (Independent Charge) Earth Sciences; MoS PMO, Personnel, Public Grievances, Pensions, Atomic Energy and Space, Dr. Jitendra Singh today informed that a Task Force had been constituted to coordinate the progress of filling up of the vacant posts as per the ‘Recruitment Plan’.

Chairing a joint meeting of DoPT, DARPG, and the Department of Pensions, the Minister said the meeting comes in the wake of Prime Minister Shri Narendra Modi’s instruction to recruit 10 lakh people in a mission mode in the next 1.5 years. He said all Ministries/Departments have also been requested to chalk out a plan to fill the vacancies by December 2023.

Dr. Jitendra Singh also appreciated officers of DoPT, particularly the CS Division and UPSC for working hard to grant mass promotion to over 8,000 government employees in one go. The orders for mass promotion of these employees belonging to the Central Secretariat Service (CSS), Central Secretariat Stenographers’ Service (CSSS) and Central Secretariat Clerical Service (CSCS) have become effective before 1stof July 2022. Of the total of 8,089 promoted employees, 4,734 are from CSS, 2,966 from CSSS and 389 from CSCS. He said it was a mammoth task as it involved preparation of Select Lists in all grades of CSS/CSSS/CSCS which were pending for 5-10 years. Promotions were held up in the three services in all the grades, due to pending litigations in Supreme Court of India.

Reviewing the progress of the Electronic-Human Resource Management System (e-HRMS) launched by Dr. Jitendra Singh in December 2017, the Minister noted with satisfaction that E-HRMS has been implemented so far in 114 organisations covering 44000 employees. Till now 48 out of 52 Ministries, 46 out of 56 departments and 19 attached /subordinate offices, 3 state Governments and 4 autonomous bodies have been covered. The Minister called for greater use of Artificial Intelligence tools so that Government employees can access their service-related information with ease. With the advanced version of e-HRMS, employees will be able to not only see all their details w.r.t service book, leave, GPF, Salary etc., but also apply for different kind of claims/reimbursements, loan/advances, leave, leave encashment, LTC advances, Tour etc. on a single platform.

Reviewing the progress made by DARPG, Dr. Jitendra Singh was apprised that the Centralised Public Grievance Redress and Monitoring System (CPGRAMS) was made operational in all Scheduled Languages to expand its outreach to all regions. Earlier, it was available only in 5 languages (Hindi, English, Bangla, Gujarati and Marathi). Centralised Public Grievance Redress and Monitoring System (CPGRAMS) is an online platform available to the citizens 24×7 to lodge their grievances to the public authorities on any subject related to service delivery. It is a single portal connected to all the Ministries/Departments of Government of India and States