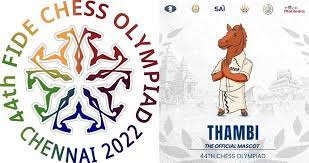 in Sports July 13, 2022 Comments Off on The 1st ever Chess Olympiad Torch Relay will reach Bhubaneswar on July 15 72 Views

Bhubaneswar:13/7/22: The first-ever torch relay for the 44th FIDE Chess Olympiad Chennai 2022 will reach Odisha on July 15, informed the Odisha’s Department of Sports and Youth Services.

The Olympiad Torch would visit Bhubaneswar, Puri and Konark after being received by Chief Minister Naveen Patnaik.

♟️The 1st ever #ChessOlympiadTorchRelay will reach #Bhubaneswar, #Odisha on July 15.

Notably, Prime Minister Narendra Modi had launched the first-ever torch relay on June 19, 2022 for the Chess Olympiad ahead of the 44th edition of the event, which will be held in Mahabalipuram from July 28 to August 10, 2022.

The torch will travel to 75 iconic locations across the country in 40 days before arriving in Mahabalipuram, near Chennai.

2022-07-13
Editor in chief
Previous: Puri:12/7/22:With Niladri Bije, the deities have make a return to the Shreemandira to adorned the sacred Ratnasinghasana
Next: India’s Cumulative COVID-19 Vaccination Coverage exceeds 199.12 Cr