Top Headlines
Home » State News » Rath Yatra festival this year, will come to an end after the Niladri Bije rituals are held during the evening 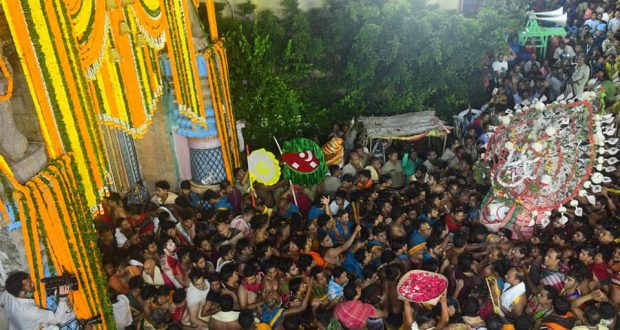 Rath Yatra festival this year, will come to an end after the Niladri Bije rituals are held during the evening

in State News July 12, 2022 Comments Off on Rath Yatra festival this year, will come to an end after the Niladri Bije rituals are held during the evening 70 Views

Puri:12/7/22: The Rath Yatra festival this year, will come to an end on Tuesday, after the Niladri Bije rituals are held during the evening.Deities home-coming ceremony to the temple is known as ‘Niladri Bije’ and this ritual marks the end of the nine-day annual sojourn of the Lords.

On the ninth day of Rath Yatra, the Bahuda Yatra, or the return festival is held. Then comes, Suna Besha (10th day), Adhara Pana (11th day) and on the 12th day, after the evening rituals, the deities return to the main temple.

Deities are taken to the sanctum sanctorum (Ratna Singhasana) in goti (in a single) pahandi procession. In goti pahandi procession the Deities move one after another, it means the next Deity only moves from the chariot after the former Deity reached to his/her destination.

In the midst of Niladri Bije rituals, Godesses Mahalaxmi, the consort of the Lord Jagannath is angry because her husband took his siblings instead of her to the Gundicha temple.

She was left in the main temple and was not part of the journey. On the Hera Panchami day, Goddess Mahalaxmi went to Gundhicha temple to meet Lord Jagannath but he closed the door of Gundicha temple and did not meet her.

Goddess Mahalaxmi maintains a close vigil from the ‘Chahani Mandap’ (a projected platform situated at the right side of the temple main gate) on the activities on the Nandighosa Ratha (the chariot of Lord Jagannath).

The myth has it that to please his upset wife, Lord Jagannath offers her rasagullas (sweet made from cottage cheese) as a peace offering to pacify Goddess Mahalaxmi. After a long conversation, Mahalakshmi finally calms down and accepts Lord Jagannath’s apology.

The gates open and Lord Jagannath to enters the temple. Before entering the main temple, a traditional act between the servitors of Lord Jagannath and Goddess Mahalaxmi is held at the Jaya Vijaya Dwara of the temple.

Lord Jagannath is made to sit beside Lakshmi where a ritual of reunion is rehearsed and finally Lord Jagannath ascends the Ratna Singhasana at the sanctum sanctorum and rejoins his brother Lord Balabhadra and sister Devi Subhadra.

2022-07-12
Editor in chief
Previous: 186 COVID-19 positive cases have been detected under the Bhubaneswar Municipal Corporation
Next: Odisha awarded 2nd prize of Rs 2 Crore in Category II for best-performing state for taking initiatives in exploration, auction, operationlization of mines