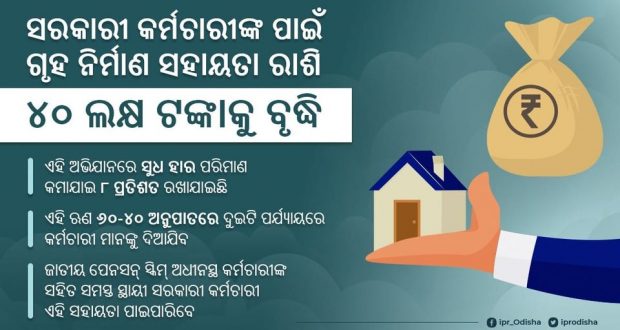 in State News July 12, 2022 Comments Off on Odisha government announced a hike in the House Building Advance for the State government employees 195 Views

Bhubaneswar:12/7/22: The Odisha government on Tuesday announced a hike in the House Building Advance (HBA) for the State government employees.

As per the Odisha government’s decision, the HBA has been increased from Rs 25 lakh to Rs 40 lakh and such decision has been taken as per the recommendations of the Seventh Pay Commission.

According to a release issued by the CMO, the government also fixed the rate of interest on HBA at 8 per cent. The loan will be disbursed to the government employees in two phases in 60-40 ratio.

As per the House Building Advance rules 2020, loan up to up to Rs 25 lakh was paid at 11.5 % interest rates. Now the assistance will be extended to all the employees under the National Pension Scheme and the permanent employees, the release read.

2022-07-12
Editor in chief
Previous: ECI appoints senior officers as Observers for Election to the Office of President of India, 2022
Next: Second phase of the Budget Session of the Odisha Legislative Assembly will begin on Wednesday.