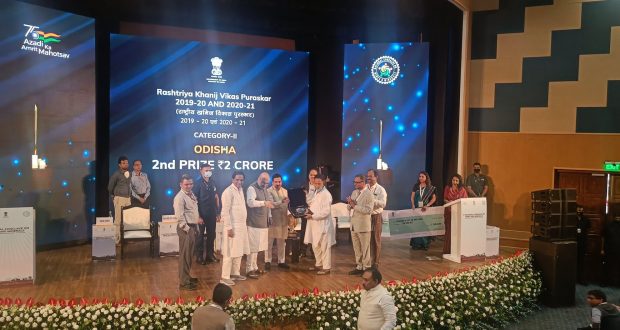 in Uncategorized July 12, 2022 Comments Off on Odisha awarded 2nd prize of Rs 2 Crore in Category II for best-performing state for taking initiatives in exploration, auction, operationlization of mines 47 Views

Union Minister for Mines Pralhad Joshi has said that Sustainable Mining is the need of the hour. Inaugurating the 6th National Conclave on Mines and Minerals in New Delhi today, Mr. Joshi said, under Prime Minister Narendra Modi, Mineral Mining Sector has reached its zenith of growth and under his vision mineral production is scaling new heights. He said, after getting suggestions from various stakeholders Government has brought many changes in the mining policies. Mr. Joshi also stressed Self Reliance on the Mining Sector.

Minister of State for Mines Raosaheb Patil Danve said, under the leadership of Prime Minister Narendra Modi, the Nation is aiming to become a five trillion-dollar economy. He said the Ministry of Mines has taken several initiatives so that there will be a win-win situation for all. Mr. Danve said, in the last eight years, India has witnessed development and it is becoming self-reliant.

2022-07-12
Editor in chief
Previous: Rath Yatra festival this year, will come to an end after the Niladri Bije rituals are held during the evening
Next: Puri:12/7/22:With Niladri Bije, the deities have make a return to the Shreemandira to adorned the sacred Ratnasinghasana! With this, the annual RathaYatra2022 concludes with utmost devotion and ecstasy for this year