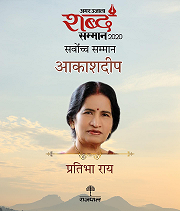 in Literature, National July 10, 2022 Comments Off on Amar Ujala’s highest word award ‘Akashdeep’ for writing and overall contribution to life will be given to Pratibha Ray an eminent writer of Oriya in non-Hindi languages 264 Views

Newdelhi:10/7/22:This year, Amar Ujala’s highest word award ‘Akashdeep’ for writing and overall contribution to life will be given to eminent story writer Shekhar Joshi in Hindi and Pratibha Rai, an eminent writer of Oriya in non-Hindi languages. Born on January 21, 1943, in Jagatsinghpur, Odisha, Pratibha Rai was given this honor for enriching Indian literary culture through extraordinary Odia creation and Shekhar Joshi, born on September 10, 1932, in Almora district, was given this honor for his outstanding contribution in the field of Hindi fiction writing. Will happen. Kannada, Marathi and Bangla languages ​​have been taken along with Hindi under Akashdeep, this year Oriya has been selected

A professor by profession and a writer by choice, Pratibha Ray is one of the most famous fiction writers in India today. She has been writing Novels and Short stories actively in her own mother tongue Odia, for the last 45 years and is a household name in Odisha.

She did her master’s in Education and Ph.D. in Educational Psychology. Her post-doctoral research was on tribalism and criminology of Bondo Highlander, one of the most primitive tribes of Odisha, India. Having deep cultural studies she wrote a voluminous novel, paged 900 on the Bondo tribe’s life and culture. No Odia writer till today has dared to step into Bondo hills as Bondos are very aggressive and violent towards plane landers.

Formerly Professor in Education and Member, Public Service Commission, Odisha, Pratibha is one of the leading fiction writers in India. Her works have been translated into various Indian languages, English, and other foreign languages.  Her thrust being psychosocial analysis, Pratibha grapples with issues of contemporary relevance, dealing with a variety of subject matters starting from mythology, history, science, tribal culture, rural and urban life, politics, and contemporary global issues. She tries to bring different levels of perception into one structure. Ray’s work is unsparing in its indictments of social evils, injustice, and corruption in narrow lanes of power and politics.

A WRITER SHOULD KNOW WHAT HE IS WRITING BECAUSE WRITING IS AN ACT BOUND BY SOCIAL RESPONSIBILITY. – SHEKHAR JOSHI

BEFORE WRITING IN ANY SUBJECT, IT IS NECESSARY TO EXPOSE YOURSELF TO THE SUBJECT. IN LIFE, YOU HAVE TO MOLD YOURSELF ACCORDINGLY. – PRATIBHA RAY

In honor of the collective dream of Indian languages, the Amar Ujala Foundation has instituted Shabd Sammons.

The Amar Ujala Shabd Samman will soon be presented in a ceremony.