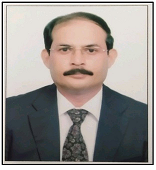 Bijoy Kumar Kar S/o Shri Janardan Kar was born on 17.06.1963 and joined the department as Assistant Commissioner on 28.08.1989. During his long & chequered career in the department, he served in various capacities at various places throughout India namely Kolkata, Bangalore, Vizag, Hyderabad etc. During 2018, he received the prestigious Presidential Award for his Specially Distinguished Record of Service. During his stint as Principal Commissioner, Bhubaneswar GST Commissionerate with additional charge Bhubaneswar Audit Commissionerate, both the Commissionerate performed exceedingly well. The Bhubaneswar Audit Commissionerate stood first in all India Annual Composite Grading for Financial Year 2020-21 for GST released by the Directorate General of Audit, New Delhi. The detection of tax evasion by the Audit Commissionerate increased by 42.45% during the year 2021-22 compared to 2020-21. Detection to the tune of Rs. 559.93 Crs was made during FY 2021-22 whereas Rs. 393.07 Crs made during the FY2020-21. Similarly, the recovery of tax increased by almost 700% during 2021-22 as compared to that of 2020-21.

Similarly, the Bhubaneswar GST Commissionerate achieved a GST revenue growth of 97.57% during the year financial year 2021-22 over FY 2020-21. Rs. 8458.04 Crs of GST revenue was realised during FY 2021-22 whereas Rs. 4281.07 Crs was realised during FY 2020-21. As a result of which growth of revenue in the Zone of Bhubaneswar, Odisha registered the highest percentage of rate of growth amongst major revenue-paying states of the country.

Under his leadership as Principal Commissioner, various outreach programmes under Azadi Ka Amrut Mahotsav (AKAM) were taken up. New taxpayer facilitation centres namely GST Seva Kendra opened at Bhubaneswar and various other locations. Also, various programmes, such as a Walkathon, Plantation of saplings, Yoga Sessions, seminars in various Schools & Colleges, and Mock Parliament on Anti-Drug Campaign by School children were also carried out.

Under the guidance & able leadership of Bijoy Kumar Kar, IRS the then  Principal Commissioner, Bhubaneswar GST Commissionerate, the celebration of the iconic week under “Azadi Ki Amrit Mahotsav” was organised successfully at Bhubaneswar to commemorate 75 years of Independence and the glorious history of its people, culture and achievements.

Bijoy Kumar Kar, IRS, Chief Commissioner, Bhubaneswar Zone has extended his best wishes to all the stakeholders for their whole-hearted support and hope for such cooperation to continue in future too.