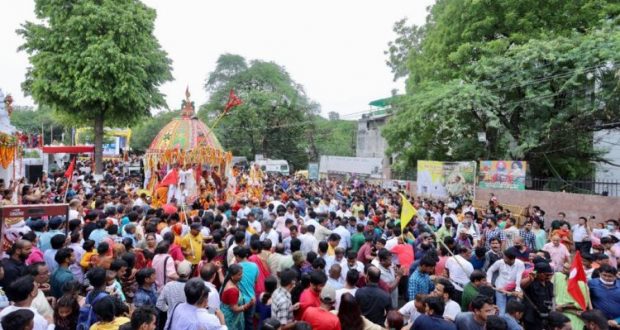 New Delhi: 9/7/22:The 44th Bahuda Yatra Festival was celebrated at the main Jagannath Temple of the National Capital Region at Hauz Khas village in New Delhi amidst fanfare and spiritual fervor.

Commencing from the wee hours in the morning all the religious rituals were performed in utmost solemnity by the priests of the temple. At about 3.30 p.m. the Four Deities were taken in Pahandi procession from the Aunt’s house situated in the basement of the temple to the aesthetically and colorfully decorated chariot stationed at the Grand Road in front of the temple.

With the recitals of hymns, shouting of slogans like Hari Bol, Jai Jagannath, and playing of musical instruments like Ghanta, Mandala, Jhanja and Mrudanga, Renowned Philanthropist and Secretary of the temple management Committee Shri Neelachal Seva Sangha Rabindra Nath Pradhan conducted the traditional sweeping of the chariot called Chherra Panhara. After that, amidst the Kirtan and singing of Bhajans and Jananas, the chariot was pulled to Shri Aurobindo Place market in the Shri Jagannath Marg by the devotees and then was returned to the temple premises around evening.

The view of the Trinity in a majestic style from the Royal Chariot during their sojourn on the street of Delhi was momentous and mesmerizing. The Deities remained on the chariot for Public viewing till night. At around 10.00 p.m. all the Four Deities were taken to the Natyamandap. As informed by the Temple management Committee Deities will remain at Natyamandap till the date of Niladribije. Since today was a holiday in Delhi and the climate was cloudy and pleasant, around 20,000  spectators congregated at Hauz Khas Village to witness the holy Festival.

2022-07-09
Editor in chief
Previous: 210 COVID-19 positive cases have been detected under the Bhubaneswar Municipal Corporation
Next: Political crisis deepens in Sri Lanka; PM Wickremesinghe announces he will resign to make way for all-party govt