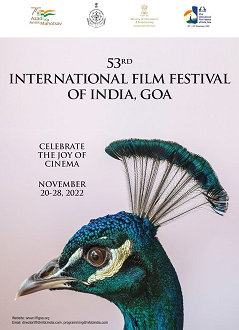 53rd IFFI is scheduled to be held during 20-28 November 2022 at Goa to celebrate the joy of cinema, the updates can be followed on the website www.iffigoa.org

Newdelhi:8/7/22:The festival aims at providing a common platform for filmmakers from across the globe to showcase their talent and put forth the excellence of cinema from all over. Bringing together film cultures, the festival allows the understanding of various social and cultural ethos and appreciation of world cinema. The festival is conducted jointly by the Directorate of Film Festivals (under the Ministry of Information and Broadcasting, Government of India) and the state Government of Goa.

To provide a common platform for the cinemas of the world to project the excellence of film art, IFFI celebrates some of the finest cinematic works every year from India and around the world. A steering committee for the 53rd International Film Festival of India has been formed to conduct this year with the below-mentioned.

The function of the Steering Committee is to support the Ministry to finalize the IFFI programming which includes finalizing various sections of the IFFI program, Master Classes, and Workshops, and cultural components.

The Steering Committee deliberated over various components of IFFI and discussed ways to enhance collaborations with international filmmakers, participation in regional cinema, giving a platform to young filmmakers as well as showcase new trends in cinema along with emerging technology that enhances the experience of cinema lovers. The Steering Committee will hold several meetings in the run-up to IFFI and ideate content curation and explore partnerships. Union Minister Sh Anurag Singh Thakur said that his vision for IFFI is to work closely with the film fraternity of Indian Cinema and use their expertise as well as understanding to take the 53rd IFFI to the next level. He said that IFFI is a festival that aims to promote the business of cinema for the benefit of the film industry by providing collaborations and networking to boost the ‘creative economy’ of India. He added that the creative economy has the potential and talent to create new entrepreneurs in the M&E sector which will help transform India into a content and post-production hub for the world.