Top Headlines
Home » Entertainment » Once Upon A Cinema : Beyond the Trinity with Tarun Majumdar 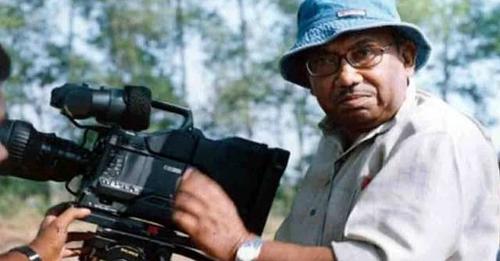 in Entertainment, Odia Cinema July 5, 2022 Comments Off on Once Upon A Cinema : Beyond the Trinity with Tarun Majumdar 80 Views

Bengali films had a unique phenomenon found nowhere else in the world: directorial teams. Film direction, known to be a solitary craft, was being performed by teams of professionals. One of the leading names in this space was of Agradoot, a team consisting of Bibhuti Laha, Bimal Ghosh, Sailen Ghoshal, Nitai Bhattacharya and Jatin Dutta. Under the title of Agradoot, this group directed landmark Bengali films, many of which are designated classics: Agni Pariksha, Shobar Opore, Pothe Holo Deri, Nayika Sangbad, Chhadmabeshi..the list is long and diverse. Taking a cue from Agradoot, another group of youngsters was waiting to make their mark in filmmaking. Tarun Majumdar was the junior-most member of this group.

Tarun wanted to be a part of the film world right from the beginning. Interestingly, his family had no objection whatsoever, despite it being the early 1950s and the stigma attached to the profession in those early days. With the help of a relative, he found work as an apprentice at Rupasri Studios, where veteran filmmaker Ardhendu Mukherjee was shooting for a film called Sanket (1951). Due to a misunderstanding with the some senior members of the technicians union. But one thing led to another, and Tarun found employment at an outfit called Anushilan Agency, which handled the publicity for Bengali films. How Tarun’s spectacular publicity design for Debaki Bose’s Pathik (1953) attracted the admiration of the legendary director himself, is the stuff of legends. Debaki Bose was so impressed by the youngster’s creativity that for the length of the campaign, he refused to have to deal with anyone else.

Kanan Devi, the reigning superstar, was making a film under her own banner, Srimati Pictures. The film, Naba Bidhan, was being directed by her husband Haridas Bhattacharya. While working on the publicity of the film, Tarun came in contact with Kanan Devi, and touched by the young man’s sincere passion for cinema, she invited him to work for Srimati Pictures. And this is where Tarun Majumdar acquired a solid grounding in cinema and all allied arts. He came in touch with the luminaries of music, literature and filmmaking, all under one roof. During this stint he encountered New Theatres’ Birendranath Sarkar, Kundan Lal Saigal, Gyan Prakash Ghosh, and Kamal Dasgupta. This is also where he met Dilip Mukherjee and Sachin Mukherjee, who also harboured dreams of filmmaking. One of the most significant films this ragtag team had assisted on was Rajlakshmi O Srikanta (1958), starring Uttam Kumar and Suchitra Sen, who were gaining some reputation as a successful on-screen romantic pair. While making the film, Uttam promised Tarun Majumdar that if Tarun were to ever direct a film, he would definitely star in it. Suchitra made a similar promise to Dilip and Sachin Mukherjee. The three men, encouraged by the success of Agradoot, formed a director’s team of their own. They called it Yatrik.

The first film the trio directed was Chawa Paoa (1959). Uttam and Suchitra kept their promise, and the film was a runaway hit. Plot-wise, the film had similarities with It Happened One Night (1934). The film had its own charm, but Tarun, unarguably the most gifted filmmaker of the team, hadn’t found his voice yet. His “voice” started taking shape with Kancher Swarga, their next film. Uttam Kumar didn’t have dates, but Tarun suggested that Dilip Mukherjee himself should be cast as the leading man. Tarun had read a story about a man who was deeply passionate about being a doctor but couldn’t finish medical school due to a lack of finances. Eventually, finding an opportunity, he fakes it and gains some reputation as a successful surgeon – till one fine day, his charade is over. Tarun found resonance with the moral and ethical dilemma in the story and ended up writing the script himself. Kancher Swarga (1962) found wide acceptance and acclaim. It was still a Yatrik film but Tarun’s influence on the film was clear as day.

It was a personal tragedy which drew him to one of his most remarkable films. Tarun’s father had passed away and he was in mourning when he read a book from his late father’s library. It was a collection of stories by writer Manoj Basu. Tarun was particularly fascinated by one of the stories, Angti Chattujjer Bhai. It was about a quintessential vagabond, an archetype that recurs throughout Tarun Majumdar’s body of work. The character was called Basanta, a drifter who refused to be bound by relationships. But at the same time, he did crave human warmth from time to time, and forged bonds, only to regret them later. Eventually, he would be on the road again, leaving broken hearts in his wake. In a sense, he was a slacker and a loser. Tarun realized he couldn’t have a conventional leading man play the role. Envisioning comic actor Anup Kumar in that role, he wrote the entire script in one frenzied session. But nobody in Bengal wanted to touch that script. There was no question of having a comedian as a hero, that too in a tragic story! Tarun named it Palatak, the deserter.

But wonder of wonders – it was a producer from faraway Maharashtra who decided to back this eccentric movie. The phenomenal V. Shantaram summoned Tarun to Bombay and expressed the desire to produce a film for him. Tarun wouldn’t have dared to show him the Palatak script, but Shantaram spotted the dossier peeking out of his bag and insisted on being given a narration. Tarun narrated the script, frame by frame. Shantaram was hooked, and he loved the idea of a comedian playing the lead role. It was settled. Palatak (1963) became the first Bengali production under V. Shantaram’s Rajkamal Kalamandir. But the film was shot entirely in Calcutta, with only the music – composed by Hemant Kumar – being recorded in Bombay. Despite Shantaram’s insistence that he add his name as director, Tarun Majumdar made sure that team Yatrik was credited in the final film. But the team had started to drift apart. Dilip Mukherjee had found success as an actor, and neither he nor Sachin seemed to be invested in the team anymore. But Tarun had found his footing as a director. His first film where he was credited as an independent director was Alor Pipasa (1965), adapted from a novel by Banaphul. Much like Palatak, Alor Pipasa was about Roshnibai, a prostitute on the fringes of society.

Tarun Majumdar went back to the theme of a misunderstood vagabond in Sriman Prithwiraj, which is a light-hearted take on the subject. Rashik Lal is an adolescent harbouring dreams of running away from home and being a globetrotter, inspired by Atish Dipankar Srigyan, or “Atisa”, as the Tibetan monks know him. But he is caught midway, dragged home and forced into marriage. It’s a Bengali bildungsroman, where Rashik Lal comes of age, and realizes the value of love, family and country. With Sriman Prithwiraj introduced two new talents to the Bengali film industry – Ayan Bandyopadhyay and Mahua Roychoudhury. Mahua went on to become quite a legend in her short-lived career, passing away at the age of 26 due to a domestic accident. In her prime, she drew comparisons with the likes of Smita Patil. With Balika Badhu (1967), Tarun Majumdar introduced Moushumi Chatterjee. Nine years later, Tarun directed the Hindi remake of the same name starring Sachin Pilgaonkar and Rajni Sharma, which has gone down in history due to an R.D Burman composition: Bade Achhe Lagte Hain. Tarun directed two other Hindi features: Rahgir (1969), a remake of Palatak, starring Biswajeet in one of his most acclaimed roles, and Balika Badhu (1976).

In his prime, Tarun made a film called Sangsar Simante, which was about a petty thief who desperately wants to turn over a new leaf and settle down with the woman he loves. But fate had other plans. Tarun’s characters, although they often came in the garb of friendly, affable personas, had a dark side and were shunned by society. Probably his single most popular film is Dadar Kirti (1980), which to the Bengali middle class represents an equivalent of Padosan or Gol Maal, the definitive comedy for the ages. And yet, it depicts extreme cruelty meted out to a person who is considered to be a buffoon, a being of lesser intelligence than what’s assumed ‘normal’.

Tarun Majumdar is one Bengali filmmaker whose work doesn’t translate well in the literal sense. His cinema is Bengali to a fault and he takes pains to ensure a degree of authenticity and capture the idiosyncrasies of Bengali ethos and language in a way that can’t quite be grasped with the help of English subtitles. And yet, there is a universality in his stories that makes a Marathi filmmaking legend shed tears in a darkened theatre.