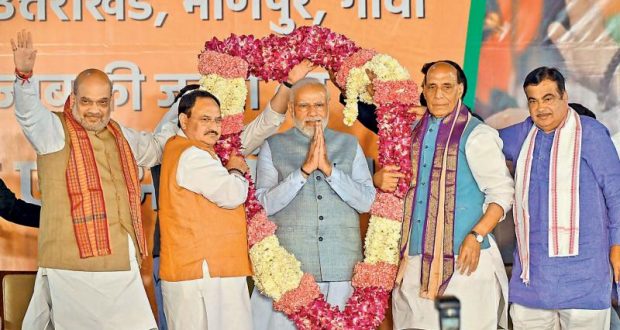 in National July 3, 2022 Comments Off on National Executive Committee meeting of BJP concludes in Hyderabad 68 Views

Newdelhi:3/7/21:The two-day National Executive Committee meeting of the Bharatiya Janata Party concluded in Hyderabad on Sunday. Addressing the BJP leaders after the meeting, Senior BJP leader and Prime Minister Narendra Modi exhorted party leaders and cadres to strive to fulfill the dream of a resurgent India. Briefing media this evening after the meeting, senior BJP leader Ravi Shankar Prasad referred to various points raised by the Prime Minister in his speech. Mr. Modi told the BJP leaders that their aim should be to take India from “appeasement to fulfillment. Mr. Prasad said the Prime Minister emphasized the need to adopt the path of fulfillment by ending appeasement.

The Prime Minister asked the party leaders to tap the enormous diversity in the country to bring them into the realm of the BJP with an attitude toward pro-People and Pro good governance. The BJP leader said Mr. Modi appreciated the party cadres, especially from the states of Telangana, West Bengal and Kerala for their firm resolve to serve in politics despite facing several challenges. The Prime Minister also noted that the country was fed up with dynastic politics and dynastic political parties and it would be difficult for such parties to survive long.

Mr. Prasad said, noting the efforts of BJP governments at the Centre and in states to empower women, the Prime Minister said women have repeatedly expressed support for the party in elections and it should continue to work for their welfare.

2022-07-03
Editor in chief
Previous: Monsoon session of the Odisha Legislative Assembly ran smoothly
Next: Public darshan of Lord Jagannath on the Adapa Mandapa in Gundicha Temple will remain closed for five hours