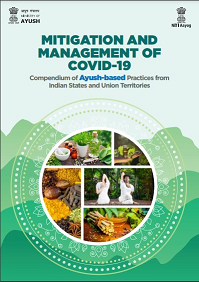 in National July 2, 2022 Comments Off on NITI Aayog releases ‘Mitigation and Management of COVID-19 61 Views

The compendium was released by Shri Suman Bery, Vice-Chairman, NITI Aayog,  and Dr. Munjpara Mahendrabhai Kalubhai, Minister of State for Ayush and WCD. The event was also attended by Dr. V K Paul, Member (Health), NITI Aayog, and Officials of NITI Aayog and the Ministry of Ayush.

Since the year 2020, the world has been facing an unprecedented public health crisis in the form of COVID-19. States and Union territories have been equal partners of the Union Government in managing the COVID-19 outbreak in India. Ayush Departments of States/UTs have joined their hands with State Health Departments to strengthen India’s fight against COVID-19. There is greater visibility of Ayush and a need to maintain momentum and build on credibility.

“It is critical to communicate the learnings from the testing times during the COVID-19 outbreak about how Ayush practices implemented at national and State level benefited people. The compendium provides information focused on practices adopted by various States and UTs of India for strengthening the country’s fight against COVID-19, using Ayush’s resources and interventions. I am sure this document will be a crucial knowledge resource for stakeholders from other countries who have a good network of traditional medicine systems. It will significantly add to our fight against COVID-19, other epidemics, and pandemics in the future,” stated NITI Aayog Vice Chairman Shri Suman Bery in his message.

“In India, along with the contemporary medicine system, Ayush systems have played an active role on various fronts to tackle the health crisis caused by the COVID-19 pandemic. I hope that these collective efforts of traditional and conventional healthcare systems will pave the way for the world by providing a holistic healthcare system model,” said Minister of State for Ayush Dr. Munjpara Mahendrabhai Kalubhai during the release of the compendium.

NITI Aayog Member Dr. V K Paul in his message mentioned, “I am hopeful that practices documented in this compendium will be useful to address any future surge of the pandemic and also serve as a model of an integrative approach to health action.”.

In preparing the compendium of Ayush-based practices, NITI Aayog reached out to all State Governments and administrations of Union territories, requesting them to share Ayush practices they have undertaken for Covid-19 mitigation and management.

The practices in the compendium have been disaggregated under five sections: (i) Overview and objectives of practices adopted by the States/UTs (ii) Ayush Human Resource and infrastructure (iii) Interventions and Initiatives (iv) Digital Platform and Tele-medicine (v) Issues occurred or addressed. The compendium has also included a summary of the Ministry of Ayush, Government of India guidelines, and initiatives.

The report indicates that traditional healthcare systems in the country to be strengthened further. The integration of evidence-based Ayush services with the modern system has the potential to significantly strengthen India’s healthcare system.

The full document can be accessed here: