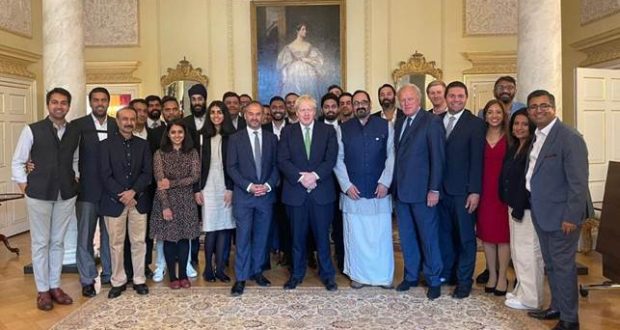 Newdelhi:2/7/22:Union Minister of State for Electronics and Information Technology Rajeev Chandrasekhar on Friday met UK Prime Minister Boris Johnson along with a delegation of Indian startups, Unicorns, and innovators. They both discussed future collaborations and partnerships between India and UK in the innovation and technology sector. Mr. Chandrasekhar also met Mr. Paul Scully, British MP in this connection.

Later briefing reporters, Mr. Chandrasekhar said both India and UK want to dramatically expand the innovation economy. “We want to take the digital economy to be 25 percent of the total economy. The UK government also wants to expand the slice of that pie too”, he said.

On India’s progress in the field of technology, the Minister said that unlike the 1990s when India used to rely on all its technological needs and used to import all parts and equipment for everything it produced, the scenario is completely different today. “It is now designing 5G gear and manufacturing the devices that go into the making of 5G products. All this has been achieved under Prime Minister Narendra Modi’s Digital India vision,” he added.

Mr. Chandrasekhar also attended a session on the Future of Digital at the IGF, UK where he put forth his views on the rapid digitalization and the need for safeguarding Digital Nagriks against user harm. As Cyberspace is a boundaryless domain, he called for collaboration amongst counties, especially like-minded democracies, to ensure safety and trust for the users.

“The data economy has created an awareness that something needs to be done for the safety of user citizens. We as policymakers have to look at data from the prism of user safety.  With the growth of the internet & big tech influence, we are at an inflection point. Safety& trust will be paramount & India can’t do that alone, we need to work with partner countries in shaping the future of a secure internet”, he emphasized.

Earlier in the day, Mr. Chandrasekhar offered obeisance at the statue of Basaveshvara, (or Basava as he is fondly referred to), a 12th-century Kannada philosopher and social reformer, who fought against discrimination on the lines of gender, caste, or class. His ideas of democracy and ahimsa have inspired generations. The statue has been installed on the banks of the Thames, near the British Parliament. It was unveiled by Prime Minister Narendra Modi in 2015.