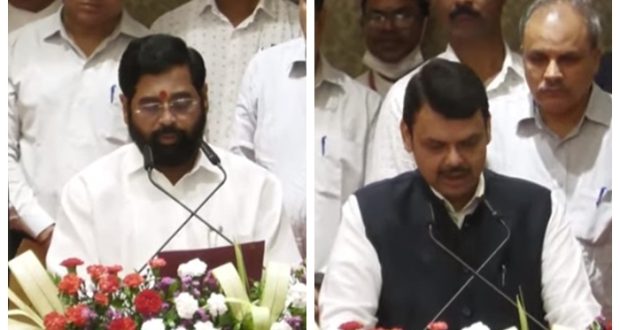 Mumbai:30/6/22:Eknath Shinde on Thursday took oath as the new chief minister of Maharashtra at the Raj Bhavan. Bharatiya Janata Party leader Devendra Fadnavis was sworn in as the deputy chief minister.

“This is the victory of the ideology of Balasaheb Thackeray and ‘Dharmaveer’ Anand Dighe. Our government will work in the interest of the general people and for the development of the state,” Shinde said after taking oath.

“I would like to congratulate Shri Eknath Shinde Ji on taking oath as Maharashtra CM. A grassroots-level leader, he brings with him rich political, legislative and administrative experience. I am confident that he will work towards taking Maharashtra to greater heights,” he tweeted.

“Congratulations to Shri Devendra Fadnavis Ji on taking oath as Maharashtra Deputy CM. He is an inspiration for every BJP Karyakarta. His experience and expertise will be an asset for the Government. I am certain he will further strengthen Maharashtra’s growth trajectory,” the prime minister tweeted.Shinde’s name was announced by Fadnavis at the press conference after they met Maharashtra governor Bhagat Singh Koshiyari to stake claim for government formation. The BJP leader had declared he won’t be a part of the government. However, there came a twist after BJP president JP Nadda said the central leadership had asked Fadnavis to join the government as the deputy chief minister. Minutes later, union home minister Amit Shah tweeted that Fadnavis would be joining the Eknath Shinde government.

Shinde, who served as the urban development minister in the previous Maha Vikas Aghadi government, rebelled against Shiv Sena boss and then chief minister Uddhav Thackeray. He along with 39 other Sena MLAs camped at a hotel in Guwahati and later in Goa, reducing the Aghadi government to a minority.

After the Supreme Court refused to put a stay on the governor’s decision to hold a floor test on Thursday, Thackeray resigned from his post last Wednesday night after announcing his decision to step down during his Facebook live address

2022-06-30
Editor in chief
Previous: Union Minister Dr Jitendra Singh holds a bilateral meeting with the Minister for Energy and Water resources of Republic of Tajikistan Mr Daler Juma Shofaqir
Next: 5th edition of the BRAP Assessment Report : Odisha Among 6 States On Achievers’ List