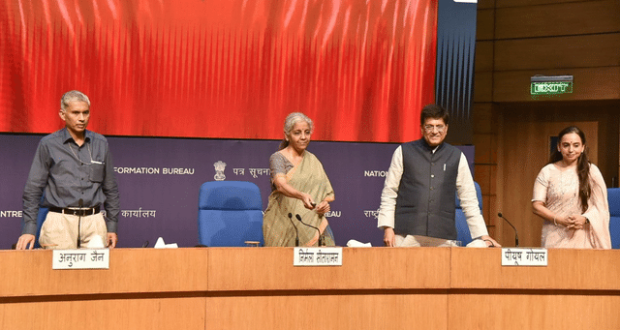 5th edition of the BRAP Assessment Report : Odisha Among 6 States On Achievers’ List

in National June 30, 2022 Comments Off on 5th edition of the BRAP Assessment Report : Odisha Among 6 States On Achievers’ List 64 Views

According to the BRAP 2020 assessment report, Andhra Pradesh, Gujarat, Haryana, Karnataka, Punjab, Tamil Nadu and Telangana are the Top Achievers based on the implementation of the Business Reforms Action Plan.

The announcements were made in the august presence of Piyush Goyal, Minister of Commerce & Industry, Consumer Affairs, Food & Public Distribution and Textiles, Anurag Jain, Secretary, DPIIT, and Senior Government officials of State and UT administration.

Speaking after releasing the assessment report, Smt. Sitharaman said that the nature of reforms had changed since 1991. “The reforms now taking place are responsive reforms. Unlike the reforms of 1991, which were given to us for implementation, there is no compulsion now. The objective is to see what will bring out improvement in systems and ensure better lives for us. An element of nudge has been brought into every layer of the government. Nudging cannot be by the government only and the industry has a big role to play there,’ the Finance Minister said. The Finance Minister appreciated the changes brought in the assessment framework of implementation under the Business Reforms Action Plan over years.

Speaking at the event, Piyush Goyal, Minister for Commerce & Industry said that the assessment has evolved from evidence-based to 100% feedback in multilingual format. He said that the purpose of this BRAP exercise is to infuse a culture of learning from each other’s best practices and improve upon the business climate in each State/UT with a unified objective for India to emerge as a most favored Investment Destination across the globe

“When Hon’ble Prime Minister gave the thrust in 2014 to improving the ease of doing business, one of his major thrust areas was that while we are working at the international level for improving our ranking, we must involve all the stakeholders including the States and UTs in our effort to get them on board so that people feel the difference and change in their ecosystem, which will lead to ease of living,” Goyal said.

“The process started in 2014 has started bearing fruit as we go along. Rather than ease of doing business is limited to a few areas, few cities and few businesses, we are seeing it being reflected across the country through the spirit of competitive federalism and also of collaboration”, the Commerce & Industry minister added.

Secretary, DPIIT Anurag Jain said that the difference between various states/UTs was so small that it did not make sense to rank them but rather put them in various categories. 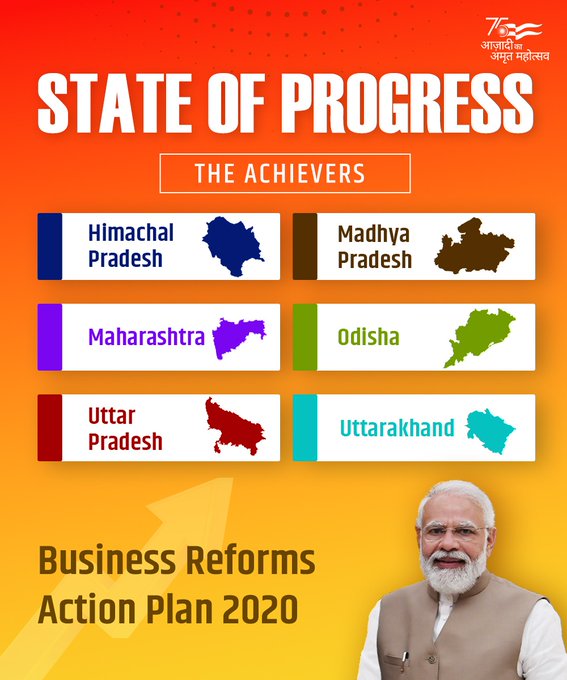 The broader aim is to boost investor confidence, foster a business-friendly climate and augment the Ease of Doing Business across the country by introducing an element of healthy competition through a system of assessing states based on their performance in the implementation of the Business Reforms Action Plan. In a departure from the previous years, where States/UTs were ranked, this year they have been placed under the four categories viz. Top Achievers, Achievers, Aspirers, and Emerging Business Ecosystems. The objective of assessing the States/UTs is not to create a hierarchy amongst States/UTs but to rather create an enabling framework wherein learnings can be shared amongst States/UTs which in turn will lead to a nationwide spillover of good practices. The assessment gives full weightage to the feedback obtained from actual users/respondents at the ground level, who provided their feedback about the effective implementation of reforms.

Since 2014, DPIIT has been assessing States/UTs based on their performance in the implementation of prescribed reforms in the Business Reforms Action Plan (BRAP) exercise. To date, assessments of States/UTs have been released for the years 2015, 2016, 2017-18, and 2019.

It is commendable to note the endeavor of the States/UTs in implementing the reforms and with that spirit, DPIIT has assessed and grouped States/UTs into broad category-wise segmentation to recognize and identify the exemplary reform measures undertaken by the States/UTs to improve the business environment.

2022-06-30
Editor in chief
Previous: Eknath Shinde takes oath as CM, Devendra Fadnavis sworn-in as deputy CM
Next: Three chariots are waiting for the Trinity to board them for the nine-day sojourn