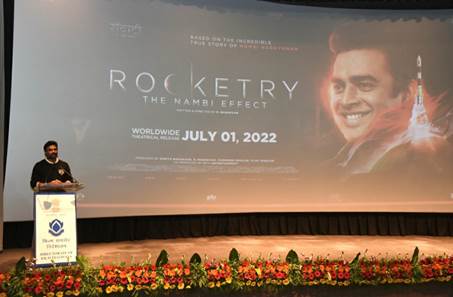 in Entertainment June 27, 2022 Comments Off on Ministry of Information & Broadcasting organized a special screening of film ‘Rocketry: The Nambi Effect’ 116 Views

New Delhi:27/6/22: The Ministry of Information & Broadcasting organized a special screening of the upcoming film ‘Rocketry: The Nambi Effect’ at Siri Fort Auditorium, New Delhi. The screening was attended by the team Rocketry led by the writer, producer, and director Shri R. Madhavan, who is also playing the titular lead role and has made a directorial debut with this movie. The screening was attended by former Director CBI Shri D. R. Karthikeyan, former IG CBI Shri P.M. Nair, senior officials in the Government of India, and stakeholders from the film industry. The film was applauded by the audience for its script, editing, acting, and portrayal of the inspiring story of the life of Shri Nambi Narayanan.

Speaking on the occasion, Shri R. Madhavan said that the film is a celebration of India’s technological prowess across the space and IT sectors. The movie is a tribute to the master Mr. Nambi Narayanan whose ‘Vikas’ engine never failed. It also conveyed the message of India’s soft power skill sets to the world about human resource expertise and scientific excellence.

Rocketry: The Nambi Effect is an upcoming Indian biographical drama film based on the life of real-life scientist Nambi Narayanan, a former scientist and aerospace engineer of the Indian Space Research Organisation, who was accused of espionage in 1994. The World Premiere of ‘Rocketry: The Nambi Effect’ was held during the 75th Cannes Film Festival. The film received a standing ovation at Cannes Film Festival.

Speaking on the occasion, Shri Apurva Chandra, Secretary, I&B said that the film is not only gripping but also touches the hearts of the audience. He added that the film pays tribute to the thousands of scientists, including Shri Nambi Narayanan, who have dedicated their entire life to the achievements of India’s space program.

Former IG CBI Shri P.M. Nair said that the film is entertaining, captivating, and very meaningful. It is a perfect combination of science, technology, and emotion, he added. The film would be welcomed not only in India but across the world.

The photography of the film took place across several countries including India, Georgia, Russia, Serbia, and France. The film was shot simultaneously in Tamil, Hindi, and English and will also be released in dubbed versions of Telugu, Malayalam, and Kannada languages. The film is scheduled for a worldwide theatrical release on 1st July 2022