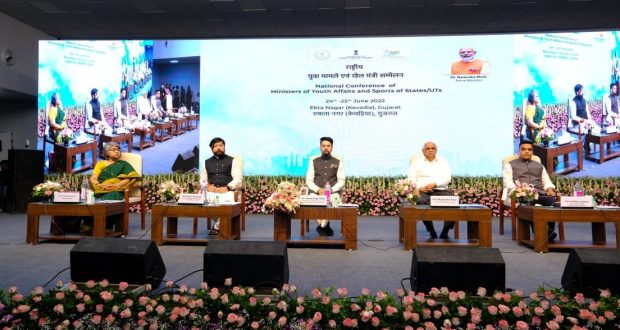 in National June 26, 2022 Comments Off on Union Minister of Youth Affairs and Sports calls for enrollment of more youth volunteers in nation building 95 Views

Newdelhi:25/6/22:Kevadia: The Union Minister of Youth Affairs and Sports Shri  Anurag Singh Thakur called upon states to increase enrollment of youth volunteers in the Nehru Yuva Kendra Sangthan (NYKS) and National Social Service (NSS) programmes as a way to increase the involvement of youth in nation-building. The second day saw the presence of Honourable Chief Minister of Gujarat Shri. Bhupendrabhai Patel.

Speaking on the concluding day of the two-day National Conference of Ministers of Youth Affairs and Sports at Kevadia in Gujarat, Shri Thakur pointed to the key role that youth volunteers had played in serving civil society during the Covid pandemic and said that states must tap into the huge youth potential of India and engage them in a range of nation-building projects. He stressed on the need to use technology to bring the youth of the nation together and create a mobile App that would ensure last-mile connectivity of youth volunteers across the nation.

The two-day conference that saw representatives from 33 states and Union territories including 15 ministers of Youth Affairs and Sports from various states was a national platform of discussions and deliberations on the way to make India a sporting nation. During the discussions Shri. Thakur said that there is a need to develop a common information bank of all states which could reflect existing infrastructure in different regions and sporting disciplines, number of coaches, equipment facilities so that future planning can be done easily. “We need to take a scientific approach towards our forward planning. There are states who are good at certain games, they have better coaches and better infrastructure that could be used by athletes from other states as well.

Coordination will be the key to achieving the vision of Honourable Prime Minister Shri. Narendra Modi Ji to see India among the Top 10 sporting nations in the world. We always have to keep the athlete at the centre and look at their ease of living even while planning our policies,” he said.