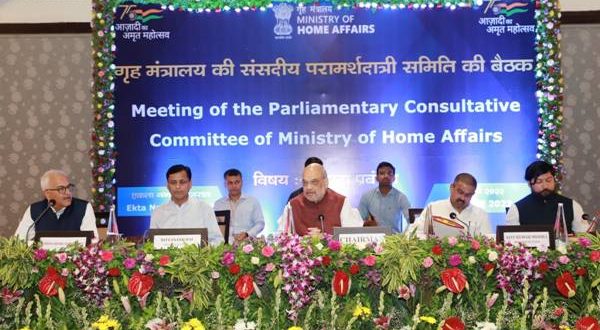 in National June 26, 2022 Comments Off on Union Minister for Home & Cooperation,Amit Shah chaired the meeting of the Parliamentary Consultative Committee on “Disaster Management” , 135 Views

Kevadiya:25/6/22: Under the chairmanship of Union Home Minister Shri Amit Shah, a meeting of the Parliamentary Consultative Committee of the Ministry of Home Affairs on “Disaster Management” was held at Kevadiya, Gujarat today. The meeting was attended by Ministers of State for Home Affairs, Shri NityanandRai, Shri Ajay Kumar Mishra, Shri NishithPramanik and Union Home Secretary, along with senior officials of the Ministry of Home Affairs, NDMA and NDRF. The Union Home Minister said that the Ministry of Home Affairs, in collaboration with NDMA and NDRF, is playing an important role in helping the States and Union Territories by providing logistics and financial assistance and coordinating response and relief measures during natural calamities. Union Home Minister said that to tackle disasters on priority basis, the spirit of public participation imbibed under AapdaMitraYojana launched at the local level is very important because, till the time people do not join it, the work of disaster management does not reach the bottom.

The Union Home Minister informed that the Inter-Ministerial Central Team (IMCT) are being deputed to States immediately after they are affected by a severe calamity, without waiting for the memorandum from the States. He also informed that for the first time mitigation funds have been constituted at the National and State level. The central government has also allocated Rs 13,693 crore for the National Disaster Mitigation Fund and Rs 32,031 crore for the State Disaster Mitigation Fund for the period 2021-22 to 2025-26. The National Disaster Response Force (NDRF) is being strengthened, modernized and expanded throughout the country.

The Union Home Minister requested members of the Parliamentary Consultative Committee to give their suggestions for detailed reforms in the Disaster Management Act, 2005. He said that on the lines of Netaji Subhas Chandra Bose AapdaPrabandhanPuraskar at the national level, the States can also give awards in the field of disaster management and can also send suggestions for the names of individuals and institutions for the award to the Centre. The members thanked the Union Home Minister for raising an important topic like ‘Disaster Management in the meeting of the Advisory Committee and gave their suggestions.