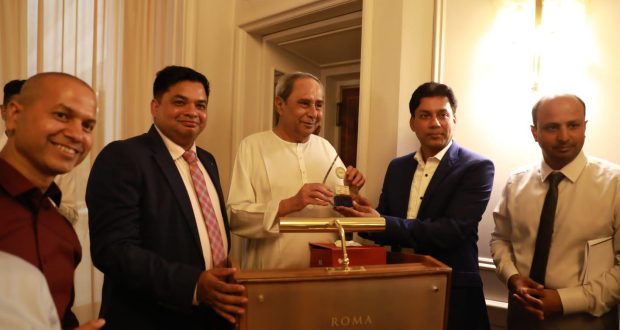 in International, State News June 24, 2022 Comments Off on Odisha CM Naveen Patnaik met up with Odia Diaspora in Rome 71 Views

Rome:24/6/22 OdishaCM Shri Naveen Patnaik met up with Odia Diaspora in Rome who are based out of 12 countries across Europe and had a lively, engaging conversation with them. The diaspora comprised of professionals, entrepreneurs, researchers and students. The diaspora was proud to recount the achievements of Odisha in the areas of food security, health, education, infrastructure, disaster management, women empowerment amongst others. They reiterated their strong sense of ownership and dedication for the development of Odisha.
CM shared with them Odisha’s transformational initiatives and invited them to partner with Odisha. CM thanked them for their renewed sense of conviction & expressed happiness to see that Odias are doing well in Europe. CM congratulated them for their success & wished them best.
Representatives from UK Odia Association explained the steps they are taking to construct a JagannathaTemple in UK to which CM assured all support. During the interaction, Secretary to CM (5T) and Resident Commissioner were also present.

Odiyas based out of 12 countries across Europe had a very lively and engaging interaction with the Chief Minister, the PS K Pandian and the Resident Commissioner Ravi Kant.

“The diaspora was proud to recount the achievements of the honourable CM’s government in the areas of food security, health, education, infrastructure, disaster management, and women empowerment amongst others,” the CMO said.

The diaspora reiterated their strong sense of ownership and dedication to the development of Odisha.

Patnaik thanked them for their renewed sense of conviction. He was especially glad to see that the Odias are doing well in Europe. He discussed with them the transformational initiatives taking place in Odisha and invited them to partner with the State government towards the development of the State.

Representatives from the UK Odia association explained the steps they are taking to construct a Jagannatha temple in the UK. The Chief Minister assured all support for the same.

He congratulated them on their successful careers and that the State is proud of their achievement. He wished them good luck in their future endeavours.

The Chief Minister is leading a high-level delegation to Rome and Dubai. The delegation is scheduled to visit the World Food Programme (WFP) headquarters in Rome to share Odisha’s “transformational journey” in food security and disaster management.

On Tuesday, the Chief Minister paid tribute to freedom fighter Mahatma Gandhi at the MG Memorial Statue at the Piazza Gandhi in Rome. Speaking on the occasion, Patnaik said that he is inspired by the ideals and principles of India’s father of the nation, Mahatma Gandhi.