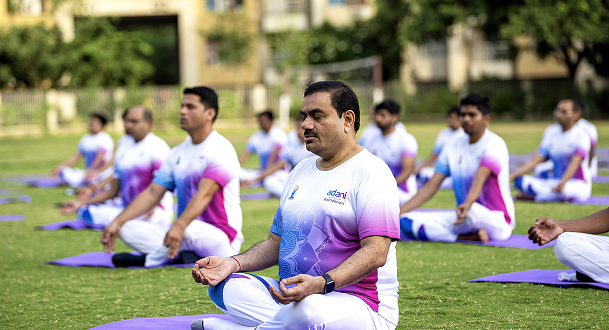 in Health, National 3 days ago Comments Off on Adani Foundation promotes A Fit India through Yoga 30 Views

Ahmedabad, 23 June 2022: On the occasion of International Day of Yoga, Gautam Adani, Chairman Adani Group and Dr. Priti Adani, Chairperson Adani Foundation participated with more than 1,000 members of the Adani Parivaar team to celebrate health, mindfulness and meditation. He gave a clarion call to everybody to practice yoga for a healthier nation.

More than 1,000 Adani employees assembled at the football ground at Adani Shantigram amidst the presence of Gautam Adani and Dr. Priti Adani. The serene green surrounding of Adani Shantigram was a perfect setting for an hour-long yoga session under the guidance of expert practitioners.

Earlier, as a part of ‘Azadi ka Amrit Mahotsav’, the Adani Foundation led a yoga-yatra (yoga tour) across 75 iconic sites in Gujarat. The yoga-yatra covers 75 heritage, tourist, archaeological sites, and landmark architectural sites across Gujarat. The sites were chosen to reflect the rich and vibrant cultural heritage of Gujarat. The yoga performances across the state have been documented in the form of short films to showcase the benefits of yoga in the backdrop of Gujarat’s unique culture, history, architectural marvels, natural eco-system, and a diverse geography.

A song, ‘Yog Karo,’ created by Sachin-Jigar and sung by Shankar Mahadevan, has also been produced to raise awareness, highlighting the beauty of Gujarat and depicting various yoga postures. The elements of each asana or posture performed in this song are linked to that particular site, such as the performance of Simhasana, Vrukshasana, and Mayurasana at Gir Forest.