Top Headlines
Home » State News » Construction of the three wooden chariots of Lord Jagannath, his brother Balbhadra and their sister Subhadra is underway 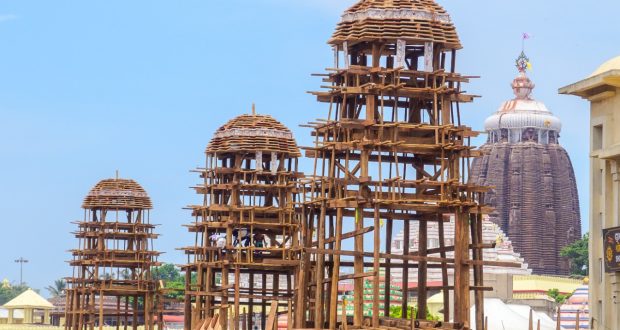 Construction of the three wooden chariots of Lord Jagannath, his brother Balbhadra and their sister Subhadra is underway

in State News 3 days ago Comments Off on Construction of the three wooden chariots of Lord Jagannath, his brother Balbhadra and their sister Subhadra is underway 32 Views

Puri:23/6/22:After two years of the pandemic, the stage is set for the world-famous Rath Yatra (chariot festival, or car festival), which commences next month on July 1 in the holy city of Puri in Odisha. Construction of the three wooden chariots of Lord Jagannath, his brother Balbhadra and their sister Subhadra for this annual festival in the 800-year-old Jagannath temple is underway. “Devotees were barred from participating in the Jagannath Rath Yatra for the last two years due to COVID-19 pandemic. This year we are expecting a crowd of around 15 lakh devotees,” said Samarth Verma, the collector of Puri. Jagannath Rath Yatra is possibly one of the oldest and the most elaborate chariot festivals in the country. A rath is built for each of the three deities, Lord Jagannath, Goddess Subhadra and Lord Balbhadra. Each houses the main deity along with nine others. Nine sages are also depicted on each chariot. These are meant to signify the nine planets in the universe. A rath can be recognized by its specific name, its colors, its charioteer, its horses and even the reins used to control them. 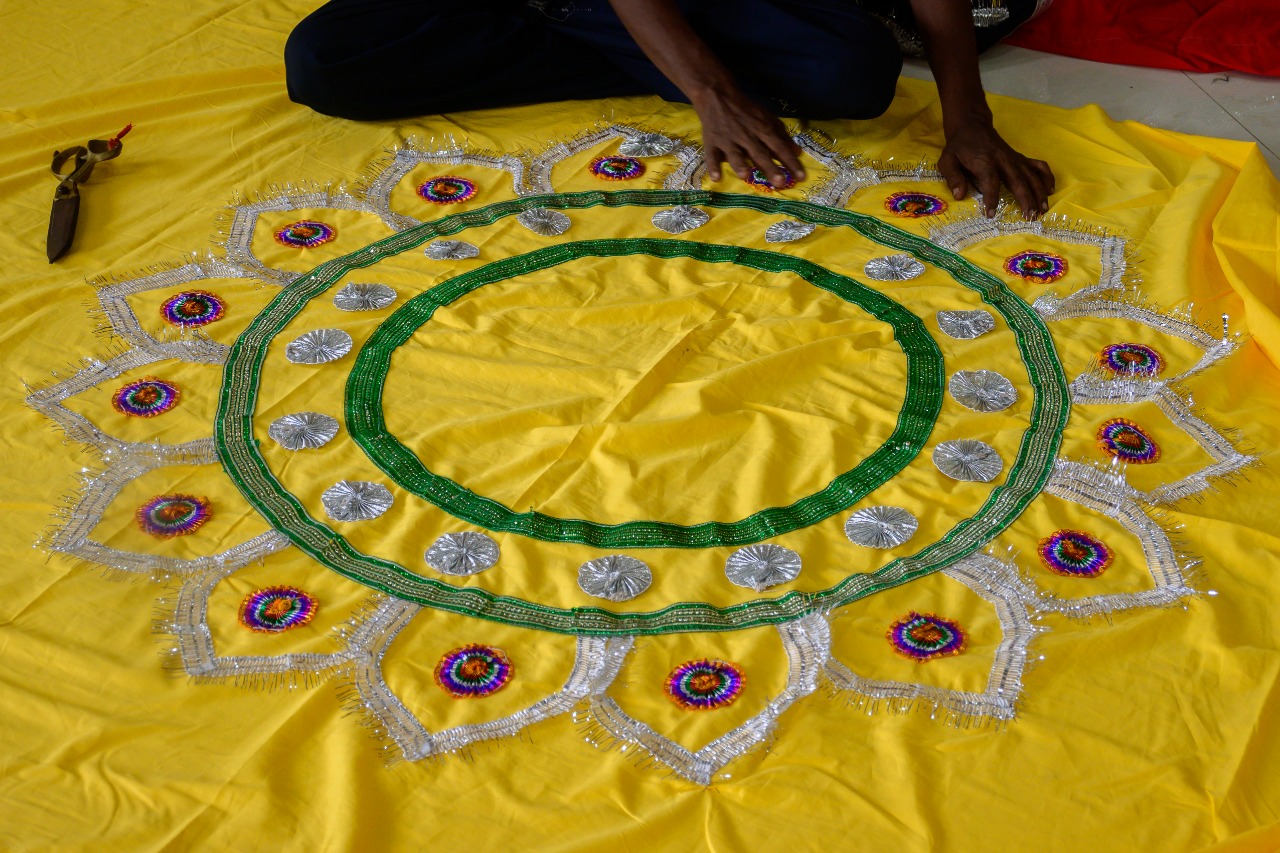 Sarat Moharana has a cloth store in Puri. But around the annual chariot festival, he takes time off from his business and concentrates on carving the images of flowers, animals, and other objects on the wood. “It is our traditional work. I learnt the art of carving on wood from my father. I am determined to keep our family tradition alive,” Sarat told Gaon Connection while carving a flower on the wheel of a chariot

Apart from carpenters, painters, who are locally called rupakar, are busy round the clock giving final touches to the three chariots for the car festival. Around 60 painters are busy painting the wheels and other parts of the chariots. “The three chariots of Nandighos (Lord Jagannath), Darpadalan (Devi Subhadra) and Taladhwaj (Lord Balbhadra) have a total of 42 wheels. 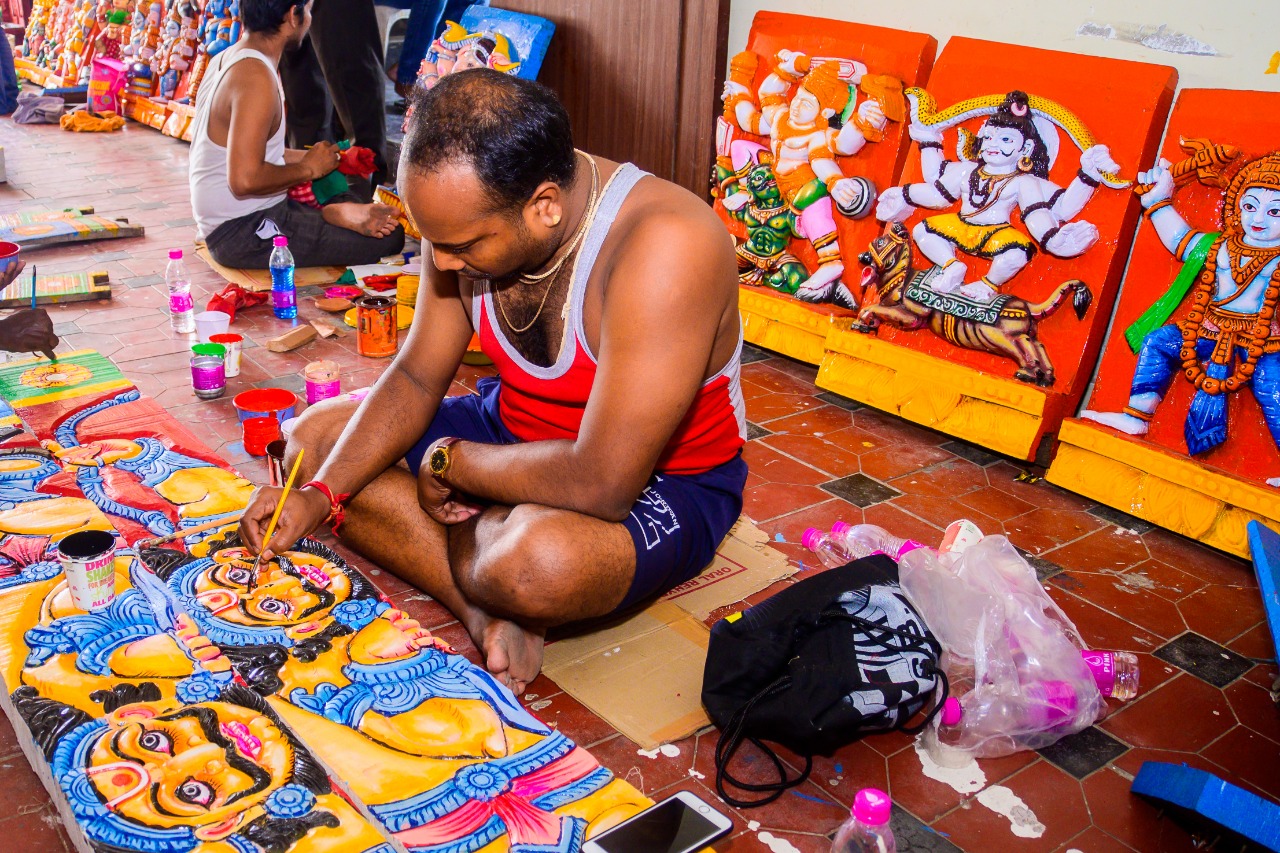 The three chariots have specific size and dimensions and are a classic example of indigenous carpentry and engineering. Only senior and expert carpenters make wheels,” 56-year-old Parikhita Moharana, who was painting wooden wheels of the chariot, said. Meanwhile, clothes for the deities are also being stitched. “To make the costumes of deities more attractive we use colour, zari threads and glitters. Since time immemorial our family members have been making costumes for the deities,” said 50-year-old Arakhita Moharana. “We are also making costumes of dancing girls, horses, elephants and other images to decorate the three chariots. With just a few days to go before the festival, we are working through the night to make sure that they are ready in time for the festival,” Nabaghan Moharana, an artisan, said. “Craftsmen can make up to Rs 500 to Rs 1,000 a day depending on their skill and area of expertise, he added.