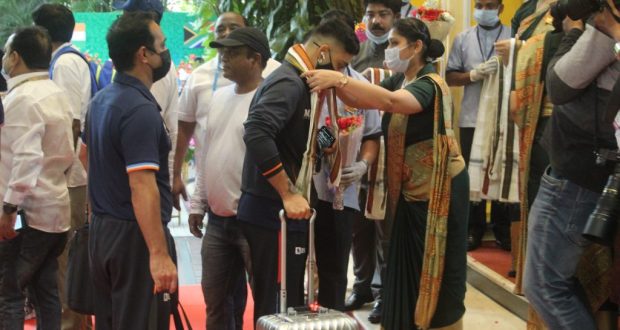 in Sports June 10, 2022 Comments Off on Players of the Indian and South African cricket teams reached In Bhubaneswar 68 Views

Bhubaneswar:10/6/22: Players of the Indian and South African cricket teams reached Odisha on Friday amid tight security ahead of their T20I game at the Barabati Stadium in Cuttack on 12 June. The players and officials of both the teams will stay at Hotel Mayfair in Bhubaneswar.

The two teams landed at the Biju Patnaik International Airport (BPIA) in Bhubaneswar around 2 pm as hundreds of cricket enthusiasts gathered to welcome them.

Fans gathered in large numbers at the airport, outside their hotel and on both sides of the road between the two places for one glimpse of the cricketing stars.

The players were welcomed at the airport by members of the Odisha Cricket Association (OCA). They were taken to the hotel in special buses amid tight security. 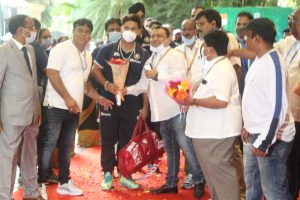 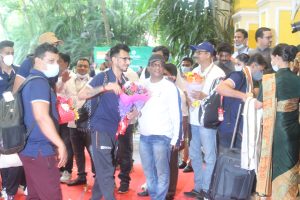 Ahead of the Sunday’s match, Director-General (DG) of Odisha Police SK Bansal along with senior officers of the police and the district administration took stock of the arrangements at the Barabati Stadium.

“All arrangements have been made to provide foolproof security to the players, and ensure a smooth match on Sunday and practice on Saturday. The preparations to make necessary arrangements started a month back,” Bansal told reporters.

He also urged spectators to follow the guidelines regarding entry and exit routes. A security mock drill was conducted for the first time ahead of the international match. 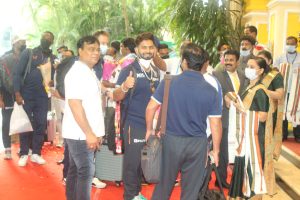 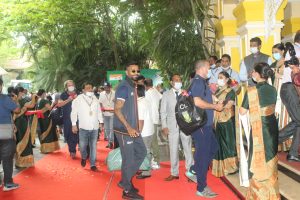 Tickets have been sold on both the online and offline modes, OCA secretary Sanjay Behera said.

Cuttack Collector BS Chayni said that a large number of VIPs and dignitaries are expected to come to the stadium for the match.

“As the chief minister has been invited, he may come to the stadium too. However, we are yet to receive any official communication in this regard,” Chayni said.

2022-06-10
Editor in chief
Previous: Monsoon session of the Odisha Legislative Assembly will start from July 2
Next: Odisha’s Men’s Kho-Kho Team has emerged victorious in a crucial match with neighbouring Andhra Pradesh