Top Headlines
Home » State News » Devotees can now have the darshan of Lord Jagannath during Snana Purnima on the Snana Bedi. 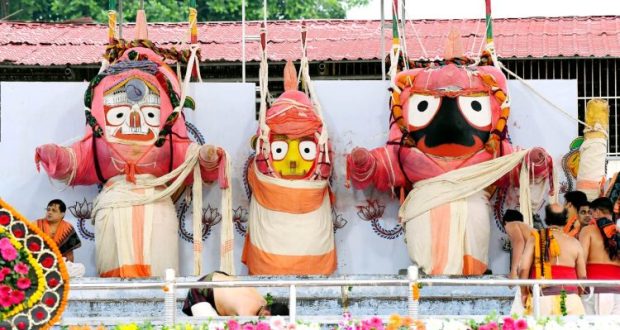 Devotees can now have the darshan of Lord Jagannath during Snana Purnima on the Snana Bedi.

in State News June 7, 2022 Comments Off on Devotees can now have the darshan of Lord Jagannath during Snana Purnima on the Snana Bedi. 163 Views

Puri:7/6/22: Ahead of the Snana Purnima and Rath Yatra of Lord Jagannath and his siblings, Srimandir Managing Committee held meeting on Tuesday.

It has been decided in the meeting that the devotees can now have the darshan of Lord Jagannath during Snana Purnima on the Snana Bedi.

The devotees can have darshan of the deities on the Snana Bedi for almost three hours. However, the devotees will not be allowed to touch the deities.

Chief Administrator of SJTA, Vir Vikram Yadav said that modalities for conducting rituals from Snana Yatra to Niladri Bije were approved at the meeting today.

In today’s meeting, senior servitors, members of the managing committee, senior police officials and officials of the district administration and line departments were present.

The Snana Yatra held on Devasnana Purnima is scheduled on June 14 while Rath Yatra will be held on July 1.