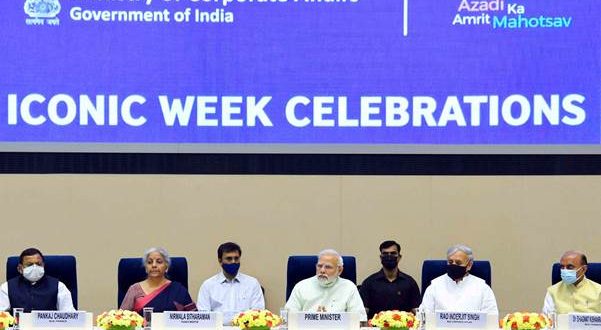 Addressing the gathering, the Prime Minister said whoever took part in the long struggle for independence, added a different dimension to this movement, and augmented its energy. Some adopted the path of satyagraha, some chose the path of weapons, some faith and spirituality, and some intellectually helped to keep the flame of freedom burning bright, today is the day when we acknowledge all of them.

Today when we are celebrating 75 years of independence, the Prime Minister stressed, that every countryman must make a special contribution to the development of the nation at their level. This is a moment to infuse the dreams of our freedom fighters with new energy and dedicate ourselves to new pledges, he said.

The Prime Minister said a large part of the world expects India to solve problems. This is possible because in the last 8 years we have trusted the wisdom of the common Indian. “We encouraged the public as intelligent participants in Growth. We have always found that whatever technology is deployed for good governance is not only adopted by people but also appreciated by them”, the Prime Minister said referring to the achievement of UPI.

Addressing the gathering, Finance Minister Smt Nirmala Sitharaman thanked the Prime Minister for inaugurating the iconic week celebrations. During this week, we shall be recalling how each department in the Finance Ministry and also in the Corporate Affairs Ministry has served the nation. The progress in India’s economy since 1947 is being captured through various activities. 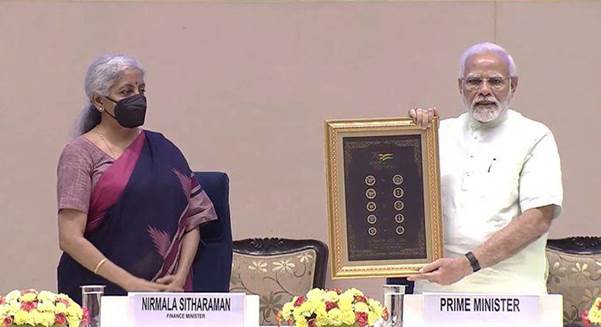 Smt. Sitharaman said, “The emphasis is to have people-to-people contact, build awareness on what the Ministry of Finance & Corporate Affairs have done in these 75 years and not particularly what they have done in last 8 years under the leadership of our Prime Minister… The story of Financial Inclusion has been captured in this video (Rupaya ka Rochak Safar) which is being shown to us. The impact of such Financial Inclusion has only resulted in greater coverage of credit for common citizens.”

The Finance Minister underlined that such a very targeted approach in the last two years has given us good results. Common citizens have been attended to in every in such way whether it is a requirement for food security or a requirement for some money to be able to face the extraordinary circumstances which the Indian economy had to face.

In his welcome address earlier, Finance Secretary Dr T.V. Somanathan thanks the Prime Minister for motivating and guiding the Ministry in evolving the fiscal policies over the last 8 years. He outlined that in the upcoming iconic week, the Ministry of Finance & Ministry of Corporate Affairs will not only attempt to showcase strengths and achievements but also solicit suggestions and ideas.  We aim to fulfil the dream of good governance through new ideas for the India of 2047, he underlined.

“Jan Samarth” provides a single-window facility for 13 Government Schemes application submissions and 125+ MLIs (including all Public Sector Banks) to choose from. Real-time checks with CBDT, GST, UDYAM, NeSL, UIDAI, CIBIL etc ensure faster loan processing. “Jan Samarth” portal will facilitate credit under Government Schemes under Agriculture, Livelihood, and Education categories. 13 Government schemes are already on Jan Samarth portal and more will be onboarded. “Jan Samarth” portal will check eligibility, give in-principle sanction and send the application to the selected Bank. It will also keep the beneficiaries updated at each stage of the journey. Multiple visits to Bank branches are not required.