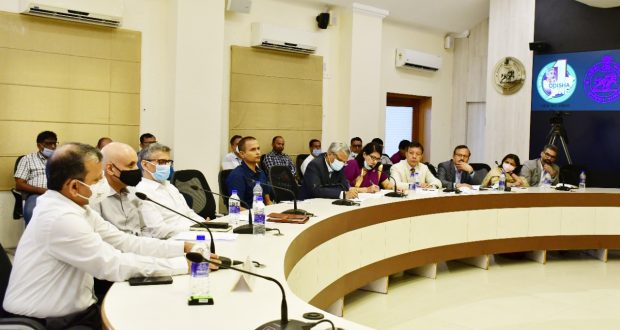 in State News June 6, 2022 Comments Off on High-Level Study Mission from Nepal applauded the successful implementation of food security provisions in Odisha 81 Views

Bhubaneswar:6/6/22: High-Level Study Mission from Nepal applauded the successful implementation of food security provisions in the State of Odisha. Members of the Team expressed such opinion after looking into the details of Odisha’s planning, implementation and monitoring of the food security programmes in a high-level interactive session held under the Chairmanship of Chief Secretary Suresh Chandra Mahapatra in State Lokseba Bhawan today.  This high-level study team from Nepal visited Odisha to know about the innovative approaches and methods adopted by State in ensuring food security for all poor and vulnerable.

Speaking to the Team Chief Secretary Suresh Mahapatra said, “No poor will stay in hunger is the motto of our Government and Governance”. All concerned departments like food security and consumer welfare, women and child development, agriculture and farmers’ empowerment, scheduled tribe and scheduled caste development, social security and empowerment of persons with disability, water resources, Panchayati Raj and Drinking Water, housing and urban development work at tandem for materializing this motto on a sustainable basis. For this, added Sri Mahapatra, “State is implementing national food security scheme, state food security programme, social security measures for old, differently able and destitute”. Recently the public distribution system ( PDS) has been transformed to a higher level with the adoption of technology, ground-truthing of databases, data sanitization and dynamic data monitoring on a real-time basis.

Principal Secretary Food Security and Consumer Welfare Sri Vir Vikram Yadav presented Odisha’s journey towards food security during the last two decades. Sri Yadav said, “We started our journey as a food importing and dependent; and, now we are a food surplus State”. The state has been participating in decentralized paddy procurement operation of Government of India since 2003-04”.  He added, “Odisha is now procuring around 76 lakh million tons of paddy from farmers of the State which is converted to around 52 lakh million tons of custom milled rice inside the State”. Against this procurement, State’s requirement for different schemes comes to around 30 lakh million tons,  and the balance of 22 lakh million tons is delivered to a central pool of the Government of India. Odisha is now the 4th largest rice supplier to the central pool.

Further, Yadav added, “The State has ensured food security for more than 95.74 lakh families embracing around 3.33 cr members which constitute nearly 80 per cent of the total population of the State as per 2011 census. The entire TDPS operation is equipped with end to end computerization. Presently, around 12,124 FPSs are distributing nearly 1.87 lakh MT of food grains to 33.3 million beneficiaries per month through 90% Aadhaar and Mobile OTP based authentication. A feedback management system has also been adopted under the Mo Sarkar framework. Sri Yadav also praised the systems adopted for inline grievance redressal, rice @ Rs.1/- per kg, supply of fortified rice etc.

The High-level Study Mission from Nepal consisted of 10 members under the leadership of Dr Dil Bahadur Gurung, a Member National Planning Commission of Nepal.  High-level officers from different Ministries associated with agriculture and food security in the Government of Nepal joined the team.  They would spend 2 days in Odisha. The team was scheduled to have field-level visits to different FPSs, food dispensing by a grain ATM and operating of WSHGs in PDS.