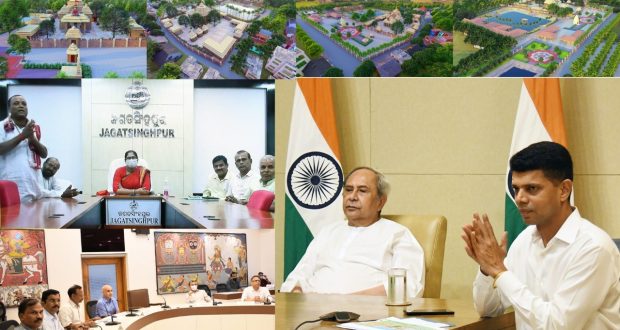 in District Diary June 2, 2022 Comments Off on Odisha Chief Minister announced a special package of Rs 42 crore for the development of Sarala Temple 112 Views

Bhubaneswar: 2/6/22; In a bid to make Odisha temples more beautiful and spacious, the state government has taken another step on Thursday. Chief Minister Naveen Patnaik announced a special package of Rs 42 crore in the first phase for the development of Sarala Temple in Jagatsinghpur. The project will be completed within a year.

According to a press note issued by the Office of the Chief Minister (CMO), the temple and its peripheral development has been taken up under the 5-T Integrated Development of Heritage and Monuments and Tourists Destination programme.

The Works Department presented the project details before the CM. In the first phase of the project, Rs 42 crore will be spent. Under this project, all sub-shrines on the premises of Sarala temple will be developed, the release read.

A bronze idol of Adikabi Sarala Das will be installed in the temple compound near the banyan tree adjacent to ‘Nanda Deula’. For this, 72 shop owners who will be displaced due to the beautification of the temple will be provided shops.

Recently, the Odisha government announced a temple development grant of Rs 70 crore for the Cuttack Chandi shrine, which also aims to complete the works in one year.

2022-06-02
Editor in chief
Previous: Wildlife film making not a career, but commitment: : Subbiah Nallamuthu
Next: Naveen Patnaik has participated in the orientation programme of newly-elected members of the Panchayati Raj Institutions