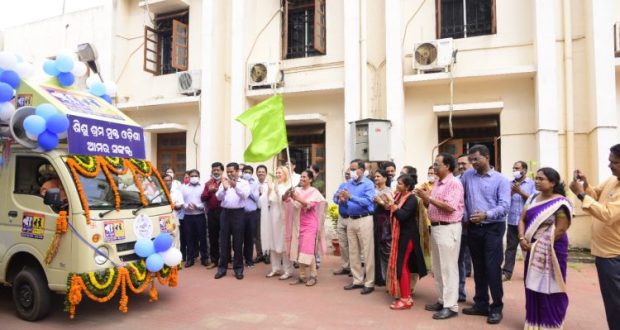 in State News May 29, 2022 Comments Off on Sishu Shrama Nirakarana Sachetanata Ratha Launched As a Campaign Against Child Labour 208 Views

Bhubaneswar: 29/5/22:The Sishu Shrama Nirakarana Sachetanata Ratha has been launched today by Smt. Chithra Arumugam, IAS, Principal Secretray, Labour and ESI Department, Govt. of Odisha, from the premises of Labour Directorate, to spread the message to end child labour and make Odisha a Child Labour Free State. This has been launched as part of a 15-Day exclusive Campaign against child labour which has been initiated by Labour and ESI Department, Govt. of Odisha in collaboration with other stakeholders namely Unicef, Peoples’ Cultural Centre, Campaign Against Child Labour, CYSD, Community Radio Association of Odisha, Aide Et Action, International Justice Mission and other Civil Society Organisations of Odisha.

This 15-Day Campaign from today will be taken up at district level throughout Odisha and different programmes like Rally, Signature Campaign, District Level Sensitisation Meeting on Child & Adolescent Labour ( P&R) Act, 1986, Sand Art in Puri etc. to spread awareness on the legal and penal provisions against employers of children as labourers.

The 15-Day Campaign will culminate on 12.06.2022 which is celebrated as World Day Against Child Labour. A State Level function has been proposed to be held on this day with participation of converging Govt. Departments, Civil Society Organisations and rescued children who have become role models for others.

2022-05-29
Editor in chief
Previous: Odisha Chief Minister encouraged the civil service probationers to follow the ideals and dreams of our founding fathers
Next: Garib Kalyan Sammelan is being organized across the country on the occasion of completion of eight years of the Modi government