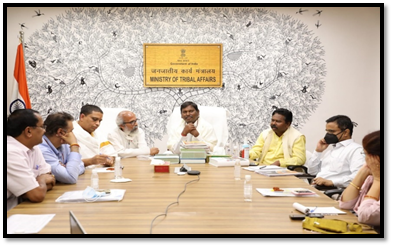 in National May 28, 2022 Comments Off on Union Minister for Tribal Affairs holds a high level meeting with team of Patanjali to review progress of projects being implemented in partnership with it 121 Views

Newdelhi:27 /5/22:  The Union Minister for Tribal Affairs, Shri Arjun Munda, held a meeting with Acharya Balkrishna, MD & Co-Founder of Patanjali Yogpeeth, and his team at Shastri Bhawan yesterday to review the progress of partnership between the Ministry and Patanjali in the area of tribal welfare and development. Patanjali has partnered with the Tribal Affairs Ministry under the “Financial Assistance for Support to Centres of Excellence (CoE) Scheme” of the Ministry.

In the meeting, various important topics related to the progress report of the projects managed by Patanjali, Research and the Welfare of tribals, were discussed in depth.

Patanjali’s team apprised at the meeting that as part of the project assigned to it by Tribal Affairs Ministry, they have taken up extensive surveys to identify and document with authenticity the medicinal plants found in the tribal areas of Uttarakhand. The team informed that they have also been carrying out capacity building in areas surveyed in order that the traditional tribal practitioners can practice herbal medicine in a more professional manner following good practices. This has resulted in knowledge sharing on both sides and has provided valuable information for documentation as per assigned project of the Ministry.  So far, Patanjali has experience in documenting 65,000 plants and has worked with 200 tribal communities as a whole. Shri Acharya Balkrishna presented his suggestions for the holistic development of tribal villages, improvement of education for tribal children and livelihood generation in the meeting. He also said that Patanjali is committed to serving the nation, and the research work done in Patanjali can be used the advancing the development of tribal areas. He also gave a detailed description of the digital platforms developed by them which can be of benefit for holistic development of the tribal communities. On this occasion, Shri Acharya Balakrishna also presented reports and a book on action plans prepared by Patanjali Ayurveda to Shri Arjun Munda.

Shri Arjun Munda stated that the work being done by Patanjali in tribal areas, in such a responsible manner, is indeed commendable. He said there is a need to seriously discuss the suggestions of Patanjali for which a committee will be formed for making a time-bound action plan. The Tribal Research Institutes and Universities across the country will also be involved in this. Furthermore, Shri Munda said that Tribal Research Institutes should also include Tribal Studies within their ambit to expand the knowledge base pertaining to tribal communities, tribal culture, tribal knowledge and tradition. Shri Arjun Munda said that practice of growing medicinal plants and preparing herbal medicines should be given the shape of a livelihood mission, especially in tribal areas abounding in medicinal plants. 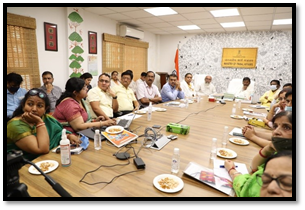 Union Minister of State for Tribal Affairs, Shri Bisheshwar Tudu, said that there is a need to run an awareness campaign among the tribal people so that the tribal people can take advantage of the welfare schemes launched by the government.