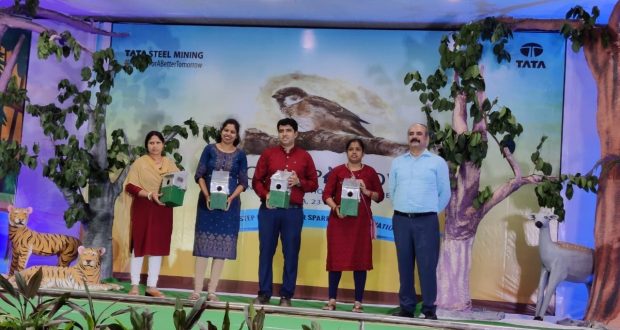 Sukinda, May 24, 2022: To spread message on enhancing the population of house sparrows whose number is said to be fluctuating in recent times, Tata Steel Mining Limited (TSML) has started a conservation drive ’Love Sparrow’ at its Sukinda Chromite Mine located in Jajpur district, Odisha. Artificial nest boxes, prepared based on scientific design and field data, were distributed to 40 volunteers who came forward to contribute to sparrow conservation. The idea behind the initiative is to help the birds to build more nests in the boxes while drawing public attention towards the conservation of the species.

Enthralled by the initiative, Dr. Randal D. Glaholt said “Love Sparrow programme is a great measure by Tata Steel Mining as a part of its Biodiversity Management Plan. These grassroots steps will help in the conservation of sparrows and ultimately contribute to enriching the biodiversity of the region”.

Speaking on the occasion, Mr. Satija said “We have taken several environmental initiatives for the conservation and restoration of biodiversity in our areas of operation. Community involvement is an important element of the success of biodiversity conservation initiatives. I am hopeful this drive will go a long way in raising awareness about the importance of sparrow conservation. “

An ambassador to the common bird species, the common house sparrow is one of the most ubiquitous birds around and a familiar winged companion of human beings. However, its numbers have seen a fluctuating trend in the recent past. The event created hope for the conservation of the house sparrow and its habitat.