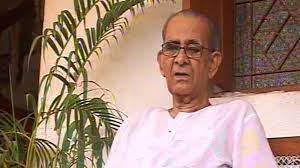 in State News May 23, 2022 Comments Off on  Veteran Communist Party of India (Marxist) leader Shivaji Patnaik passed away 165 Views

Bhubaneswar:23/5/22: Veteran Communist Party of India (Marxist) leader and former MP Shivaji Patnaik passed away on Monday. He was 92.

He was undergoing treatment at a private hospital in Bhubaneswar where he breathed his last, informed CPI(M) state secretary Ali Kishor Patnaik.

Notably, Patnaik was elected to Lok Sabha thrice from the Bhubaneswar Parliamentary constituency in 1977, 1989 and 1991.

Condolences poured in from all quarters after Patnaik’s demise news broke.

“His (Shivaji Patnaik’s) life-long struggle as a political and social activist for the welfare of the poor and downtrodden will always be remembered,” Pradhan wrote in Twitter.