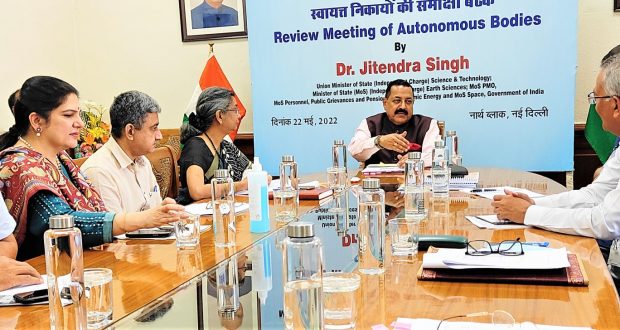 in National May 22, 2022 Comments Off on NRA gearing up to conduct computer-based online Common Eligibility Test (CET) for recruitment to Non-Gazetted posts by the year-end: Dr Jitendra Singh 86 Views

Newdelhi:22/5/22:Union Minister of State (Independent Charge) Ministry of Science and Technology; Minister of State (Independent Charge) Ministry of Earth Science; MoS of Prime Minister’s Office and Ministry of Personnel, Public Grievances & Pensions, Atomic Energy and Space, Dr. Jitendra Singh today said that there will be Common Eligibility Test (CET) for recruitment to Non-Gazetted posts from this year, and the first such test is being scheduled to be conducted before the year-end.

Chairing the joint meeting of all the six Autonomous Bodies under the Department of Personnel & Training (DoPT) at North Block here, the Minister said, the National Recruitment Agency (NRA) under DoPT is gearing up to conduct a computer-based online Common Eligibility Test (CET) for recruitment to Non-Gazetted posts by the year-end. This will be a game-changer providing ease of recruitment to the job aspirants, with at least one exam center in each district of the country.

Dr. Jitendra Singh said, the Common Entrance Test is a path-breaking reform carried out by the DoPT to bring about “Ease of Recruitment” for young job aspirants and it will prove to be a major boon for youth, especially those living in far-flung and remote areas. He said the historic reform will provide a level playing field to all the candidates, regardless of their background or socioeconomic status. There will also be a huge benefit to women and Divyang candidates and for those who find it financially unaffordable to appear for multiple tests by traveling to multiple Centres.

Initially, the test will be conducted in 12 languages including Hindi and English and will, later on, add all the languages mentioned in the 8th Schedule of the Constitution, the Minister added.

In line with the mandate of the Department of Expenditure Dr. Jitendra Singh directed the senior officials to explore the possibility of the merger of Grih Kalyan Kendras (GKK) and Central Civil Services Cultural and Sports Board (CCSCSB) due to overlapping mandate and aims and objectives. He asked the officials to come out with a feasibility report within one month.

The Minister also guided the Kendriya Bhandar to open more outlets at centers of Grih Kalyan Kendras and IIPA for increasing sales and cost-cutting. He asked Kendriya Bhandar to go whole hog to promote its unique product of organic pulses and build a brand for the same. He also lauded the KB officials for achieving 500 percent growth in sales from Rs 750 crore in 2027-18 to Rs 4,000 Crore in 2021-22.