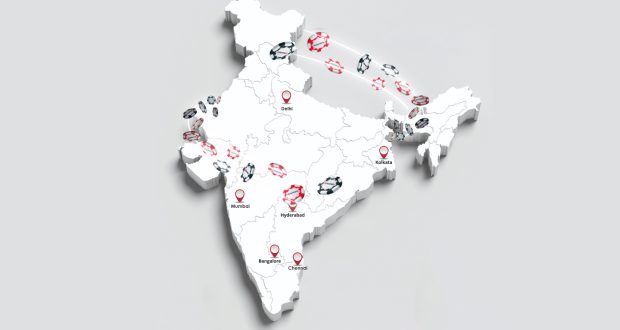 in National May 21, 2022 Comments Off on From Delhi to Hyderabad: 6 major cities make up 66% of India’s online casino players, research finds 101 Views

Gambling in India has historically been popular, and the advent of digital technology has brought on an even more dynamic gambling market with desi players now opting for online casino games as mobile games become more common.

On a state-by-state level, it appears that highly urbanized states and cities make up the majority of the online gambling players in the country. In fact, analysts at SevenJackpots identified, based on aggregated research data, the six major cities that add up to almost two-thirds of all Indian online casino players.

Maharashtra and Telangana, both considered to be low-poverty, high-income states, were found to bring in more than 1/6 of all player visits and online casino registrations; the states of West Bengal and Karnataka, which enjoy above-poverty levels and a sizable population, also rank high in the list of areas with high user visits to online gambling sites.

“Put simply, the states which are home to the leading 6 Indian cities ensure the majority of online gambling, with 62.1% of all online casino customers,” the report noted.

At least 40% of Internet users in India gamble

With the country becoming increasingly urban, it’s no surprise that young urban Indians are now the main users in most online markets. Online gaming, in particular, is seeing a massive growth in popularity in India largely due to the improved Internet coverage in the country, coupled with the wide availability of affordable mobile devices as well as cheap data plans and e-payment options.

Dmitry Belianin, CMO of Parimatch International, projected that India is poised to surpass the United Kingdom in the percentage of people who gamble given that already around 40 percent of Internet users in the country gamble. And he is not too far off the mark: Government estimates there are now 365 million mobile gamers in the country, putting the country in second place among the largest mobile gaming markets, right behind China—and that number isn’t going down anytime soon.

Per a Nielsen survey, Indians spend an average of 218 minutes playing mobile games on a weekly basis, up from 151 minutes pre-pandemic lockdowns. Separate research by ENV Media also showed that “almost half of responding gamers play in 10-minute sessions between daily chores or when taking breaks” while the committed gamers commit “up to an hour per single sitting” of playtime.

“In some form or the other, it [gambling] has been part of the culture and has been passed on down the generations. As time progressed and technology made advancements, the iGaming world also progressed along with it, making India the second-largest market for iGaming across the globe,” Belianin told the Times of India.