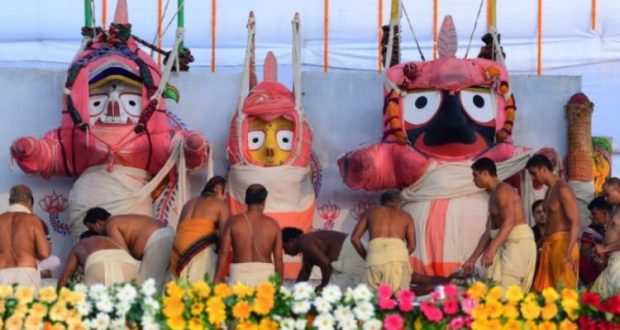 in District Diary, State News May 19, 2022 Comments Off on Snana Yatra will be held this year with public participation 68 Views

Puri:19/5/22: The Snana Yatra will be held this year with public participation, according to the Shree Jagannath Temple Administration (SJTA).

The decision was taken following a meeting with Daitapati Nijog servitors today.

According to SJTA official, devotees will be able to have Darshan of Lord Jagannath, Lord Balabhadra, Lord Sudarshan and Devi Subhadra, from the path below the bathing altar.

Celebrated just before the world-renowned Rath Yatra of Lord Jagannath in Puri, Deva Snana Purnima is a ritualistic bathing ceremony of the deities of the Jagannath Temple – Lord Jagannath, Devi Subhadra, and Lord Balabhadra.

As per Skanda Purana, when Raja Indradyumna installed the wooden deities, he arranged this bathing ceremony, and hence, the day is celebrated to bathe the trinity.

The idols of Lord Jagannath, Devi Subhadra, and Lord Balabhadra are taken out from the Ratnasimhasan of the Jagannath Puri Temple, early in the morning. These idols are brought to the snana bedi or the bathing altar.

The water which is used for bathing the three deities are taken from the well inside the Jagannath Temple. Prior to the bathing ceremony on Devasnana Purnima, a few puja and rituals are performed by the priests, where a total of 108 pitchers of herbal and aromatic water are used to bath the three main deities of the Jagannath Temple.

While the deities are then dressed up in Sada Besha after the bath, the idols of Lord Jagannath, Devi Subhadra and Lord Balabhadra are dressed as Hathi Besha, or in the form of Lord Ganesha later in the day. At night, the three main deities – Lord Jagannath, Devi Subhadra and Lord Balabhadra – retire to the Anasar House. During this Anasara period, the devotees are forbidden to see the idols of the Lord, which appear for public viewing only after 15 days, on the day just before the famous Rath Yatra.