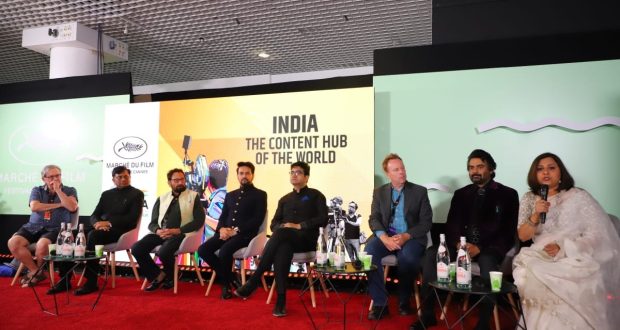 in Entertainment May 19, 2022 Comments Off on Government policies to help media and entertainment ecosystem to generate USD 53 billion annually by 2025 70 Views

This year marks the 75th year of celebration of both Cannes Film Festival and of establishment of India-France diplomatic relations. Speaking on the importance of Cannes the Minister said that over the years, ‘Festival de Cannes’ has played a significant role in strengthening Indo-French relations. The Minister noted historic highs of Indian cinema and said that Indian content has been ruling the hearts and minds of the global audience and the stepping stone was laid by bestowing the Palme d’Or to the prolific Indian filmmaker Chetan Anand’s film Neecha Nagar in 1946 and a decade later in 1956, Satyajit Ray’s Pather Panchali won the Palme d’Or. Today the recognition of our cinematic excellence the world over is set to manifest the country into the ‘content hub of the world’, the Minister added.

Speaking on India’s current presence in Cannes the Minister said “India intends to give you – the global audience, a flavour of the country’s cinematic excellence, technological prowess, rich culture and illustrious heritage of storytelling”. “India’s red carpet presence captured the diversity of our cinematic excellence not only in terms of representation of actors and filmmakers from various languages and regions but also OTT platforms, with a strong presence of music composers and folk artists who have enthralled audiences both young and old”, the Minister further added.

The Minister informed the audience about the presence of Indian startups in Cannes and said the startups from media and entertainment sector will showcase their technological prowess and pitch to the best from the world of AVGC along with a strong delegation of animation professionals from the sector.

The Minister informed the audience of the various measures by both Union and State governments and said while the Center has envisioned significant initiatives over the last 8 years to boost co-productions, film shoots and film facilitations in India, States like Uttar Pradesh and Madhya Pradesh have formulated their own film facilitation policies and provided co-production opportunities. He stated that these efforts aimed at boosting India’s media and entertainment ecosystem, which is expected to generate USD 53 billion annually by 2025.

In one such measure, the “Government of India officially designated audiovisual services as one of 12 ‘champion service sectors’ and recently set up an AVGC task force comprising of industry leaders to prepare a policy roadmap for India to take a quantum leap in this sector and position us as the preferred ‘post-production hub of the world’ “.

Shri Anurag Thakur said that on one hand artificial intelligence, virtual reality, and immersive technologies such as the Metaverse, present immense possibilities to India’s IT skilled workforce, the OTT market in India is predicted to grow at 21% annually to nearly 2 Billion Dollars by 2024 on the other.

The Minister promised that the Government will take all necessary measures to transform India into a Global Content Sub Continent and use the skills of our youth to make India the preferred Post Production Hub for the AVGC sector and to that end Government will speed up co-production collaborations from around the world and also offer the best locations in India for Film Shoots. These steps, Shri Thakur envisioned, will in the next 5 years, catapult Bharat into the league of leading quality content producing nations across the globe.

Shri Thakur concluded his statement by extending a warm invitation to shoot in India, bask in its hospitality and relish its breathtaking landscape.

Shri Shekhar Kapur spoke about the effect of access to cheap broadband and mobile devices having a disruptive effect on movie industry and said that India is about to become the world’s biggest ‘influencer economy’ and that cinema will soon be redefined by the young filmmakers.

India is a pool of restless dreams, dreams that are restless to make it big, of looking forward, added Shri Prasoon Joshi to the comment of Shri Shekhar Kapur.

Shri Apurva Chandra cited movies like Lunchbox, Mr. and Mrs. Iyer and Rocketry that are typically Indian in their story but have resonated with audiences across the world. He further reiterated the incentives announced by the Government of India yesterday for filmmakers from across the world.

Shri R. Madhavan commented on how India has so much to tell the world in the field of science and technology and the cinema world must explore this idea. From Aryabhatta to Sundar Pichai India has extraordinary stories which are aspirations of youngsters around the world.